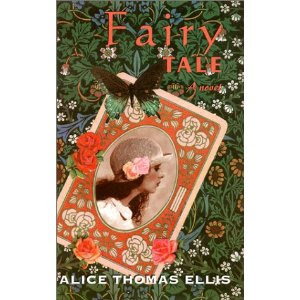 Graham Greene once said that "every writer has a splinter of ice in his heart." I thought of this when I was reading Fairy Tale, a strange and sharply-written novel about a group of Londoners encountering fairies in rural Wales. These aren't, however, the kind of fairies who flit about in the moonlight playing merry pranks on maids and shepherds. These fairies eat people. But this isn't a full-on fantasy story; the fairies are mostly symbolic of some hard truths the human characters must deal with.

The four characters in the novel are Eloise, Sam, Clare and Miriam. Eloise and Sam are a somewhat New Age couple who've decamped from London to live the rural life in Wales. Both are from upper middle-class backgrounds. Sam works as a handyman, while Eloise sews exquisite clothes that are sold in a local upmarket store. Clare, Eloise's mother, lives in London. She's divorced, apparently living comfortably on her alimony, and desperately hoping to find another man. She seems to spend most of her spare time dining and drinking with her best friend Miriam. Clare begins to suspect that something is not quite right with Eloise and asks Miriam to go to Wales to check up on things. Miriam goes to the idyllic red cottage Eloise and Simon live in and finds that strange things are going on. Four peculiar men keep turning up at the cottage to ask odd questions, Eloise is acting broody and disappearing for long stretches of time, and there's something not quite right about the whole area. Clare travels down from London and it slowly emerges that the local fairy folk want Eloise to act as some kind of surrogate mother for a fairy child.

A plot description doesn't really do this novel justice. It's too easy to make it sound cute or silly. This is first of all an unsparing portrait of the emotional and spiritual lives of the four main characters. This is where the quote from Graham Greene comes into play. Alice Thomas Ellis is absolutely merciless with her characters. Their fears, their shallowness, their uncertainty about how to live their lives is put on display like meat in a butcher's window. The author's ruthlessness with her characters is reminiscent of the way Evelyn Waugh handled his characters. I looked up Ellis' bio online and found that, like Waugh and Greene, she was a Catholic, and a hardcore one at that. Mel Gibson hardcore. It leaves me wondering if a feature of English Catholic writers is a determination to see the worst in every character. Something to do with original sin? I don't know enough about Catholicism to say one way or another, but Ellis clearly had that "sliver of ice" in her heart that's needed to coldly examine all aspects of a character.

Ellis may have been a more-Catholic-than-the-Pope Catholic, but she keeps her religious beliefs on a short leash. There's definitely a religious aspect to this novel, but it's never shouted out. The lesson that seems to be on offer is that our modern, self-obsessed lives and faddish beliefs blind us to the older, deeper and more dangerous mysteries. The cuckoo in the Catholic nest here is Miriam, who is Jewish. She plays a key role in the climax of the story and it would seem that Ellis is suggesting, on a symbolic level, that Jews should embrace Christ. I may well be misreading this part of the novel, but why else does Ellis make a point of having a Jew as one of her characters?

Take away the religious aspects and this is still a fine, creepy novel. Ellis is a deft and clever writer, and her handling of the supernatural elements is excellent; it makes you wish she'd tried her hand at a more traditional fantasy or horror novel.