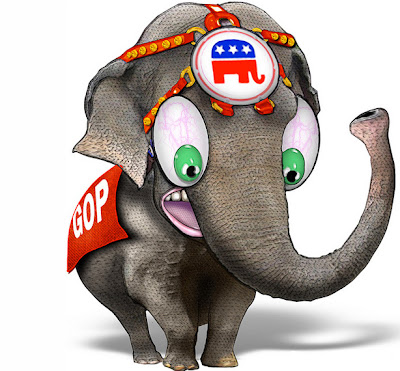 When Todd Akin, the Republican congressman from Missouri, recently managed the neat trick of placing his foot in his mouth while at the same time inserting his head up his ass thanks to his theories about "legitimate rape", it caused a richly deserved firestorm of legitimate anger. What wasn't mentioned much, if at all, was that this level of idiocy has now become the new normal on the right wing of American politics. In the last decade or so, but especially since the election of President Obama, Republican politicians have rarely gone a month without saying something so outrageously stupid you have to wonder if they aren't doing it just to keep staffers at The Onion busy; kind of a make-work program for humorists. Don't believe me? Just Google stupidest quotes from Michele Bachmann, Rick Perry, Rick Santorum, Sarah Palin,  and Jan Brewer; you'll be spoiled for choice.

So why is it that the right wing is producing more and better knuckleheads? The answer, my friends, is something I'm going to call Selective Ideological Inbreeding. And here's the theory in a nutshell: any organization, political or otherwise, that experiences success with a particular strategy will try and replicate or reinforce that success by enhancing or amplifying their winning strategy. What starts out as a strategic course can then become an entrenched culture, a codified and glorified mode of thinking, an orthodoxy that's held to be the one true path to success. The leaders of such an organization tend to recruit to their cause those who are not only in accord with their ideological vision, but who take it to the next level. In this way organizations can become bastions of inbreeding, with the organization's leaders selecting only those new recruits who resemble themselves in every ideological detail and bring an even more ferocious level of commitment to the organization's strategic philosophy. And what does this selective ideological inbreeding produce? In the case of the Republican Party it's created politicians who try and outdo each other in enthusiastic idiocy, moral viciousness and religious fervour.

The beginning of this process began for the GOP with the election of Ronald Reagan in 1980. To their delight and surprise the Republicans found that it was possible to elect a genial, flag-waving simpleton to the highest office in the land on a platform based largely on the concept that government is bad for you. By 1984 Reagan's simpleness was slipping into senility, but he still won handily. Reagan's success owed a huge debt to the religious right, which was leading a backlash, a cultural revolution, against liberal social policies and attitudes that had been on the rise since the 1960s. The twinning of simple-mindedness and religiosity became the template Republicans chose for their strategic philosophy. And why not? From a purely practical point of view it seemed to be a surefire winning formula, delivering strong mandates in both '80 and '84.

The dumb and devout template was a new concept in the '80s. Nixon and Eisenhower, the two previous Republican presidents (I'm omitting Gerald Ford because he wasn't elected), were no dummies, and their religion (what little they had) was not put on show. And by present-day Republican standards both were dangerously liberal: Eisenhower pushed through a massive public works bill to create the Interstate Highway System (tax and spend politician!), and Nixon created the Environmental Protection Agency (job-killing treehugger!). After Reagan, the ideal, and often typical, Republican politician became someone who combined equal levels of anti-intellectualism and old-time, tent revival Christianity. And the poster boy for this job description? George W. Bush. This degradation in the quality of Republican politicos is due to the selective ideological inbreeding syndrome: the backers and promoters of right-wing politicians are in a race to the bottom to find the next candidate who's denser and more pious than the last. We've now reached a point where the standardized Republican politician has become a bug-eyed amalgam of braying piety and Forrest Gump philosophizing.

Given the constant dumbing down of Republican politicians and policies it was almost inevitable that the Tea Party would spring to life. If you view the so-called Reagan Revolution as equivalent to China's Cultural Revolution in its basic aim of creating a purer, more orthodox society, then the Tea Party can be seen as the Red Guards: a spontaneous, populist movement that runs on adrenaline, inchoate outrage and holier-than-thou moral superiority that aims to add vim and vigour to the on-going cultural revolution. And like the Red Guards, the Tea Party became the tail wagging the dog. It's the Tea Party, the children of the Reagan Revolution, who helped produce a climate in which people who one or two generations ago would have been dismissed as nutjobs, cranks or fools, were now competing to become the leader of the free world. If Mitt Romney seems like a reasonable choice for president, it's only because in comparison to the political sideshow freaks he beat out for the nomination he comes across as a pillar of common sense and reasonableness.

What's dangerous about the Republican Party's program of selective ideological inbreeding is that in some future presidential election one of their Frankenstein monsters might win the day. It's far from unthinkable. Earlier this year it looked like Michele Bachmann, the woman who said that hurricanes and earthquakes were God's message that government spending was out of control, appeared to have a good chance of winning the primaries. And if the GOP's ideological inbreeding continues at its current pace the next Michele Bachmann will make the original look like Eleanor Roosevelt. Be afraid. Be very afraid.

Finally, Proof That Jesus Would Vote Republican
What Makes a Conservative Conservative?
Posted by Cary Watson at 10:27 PM