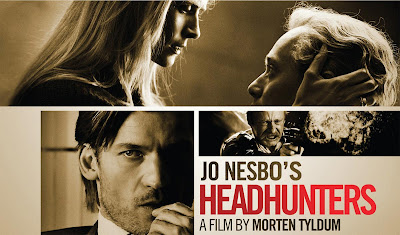 This makes three Norwegian films I've seen in the last year, and that would make, let's see, three I've seen in my entire life. In baseball terms, the Norwegians are 3 for 3, with two doubles and a triple. The triple is Headhunters. This thriller cleverly combines industrial espionage with art theft, and a lead character who suffers from self-esteem issues related to his height and a wife who (he thinks) is seriously out of his league.

Not much can be said about the plot of Headhunters without going spoiler-crazy, but it has many moving parts, lots of twists and turns, and on the whole it doesn't have too many of those moments where the audience goes, "Wait a minute, that doesn't make sense. Why would he do that/go there/have one of those?" We are asked to suspend our disbelief on a couple of occasions, but that's par for the course for most thrillers. What's important is that we root for the hero (in this case something of an anti-hero) and be constantly on the edge of our seats. On that basis, Headhunters works very well. The pace is furious, the action is sometimes shockingly bloody, and our hero is clever and resourceful.

Another interesting aspect of Headhunters is that it shows how producers working far away from Hollywood, or coping with non-Hollywood budgets, can punch above their weight.  Headhunters had a budget of roughly $5m, which, to put things in perspective, is what a 45 minute episode of the TV show House costs. Headhunters doesn't have the budget to dazzle an audience with star power, special effects or massive action sequences; instead, the film gives us a compelling, intricate story that's told with fluency, energy, and precision. That's all you need. The producers found a novel (by Jo Nesbo) with a great plot and built the film around it. The Hollywood model of production is often the reverse: assemble some stars, dump a ton of money on sfx or grandiose action scenes, and then try to stick bits of a story on to the resulting mess. The Mission Impossible franchise is a textbook example of this kind of Hollywood production. The French film industry virtually specializes in tense, clever, imaginatively-plotted thrillers, many of which end up getting remade (badly) by Hollywood, most notably The Tourist with Johnny Depp and Angelina Jolie. It started life as a smart French film called Anthony Zimmer. The addition of big stars and big money only ruined things. Some other recent French thrillers that are worth checking out include L'appartement, Point Blank, The Prey and Chamber of Death.

I'm quite surprised this flick only took $5 million to make. Looks well over $10 million. Many scenes look Hollywood grade.