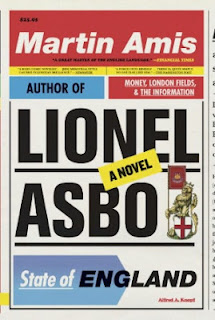 I have this mental picture of Martin Amis as a boy: he's standing behind the high, secure fence of the family estate, watching the neighbourhood walk by. Whenever a rough-looking boy or a lad who's clearly from a state school goes past, young Martin shouts out things like "oik" or "spiv" or any other insulting terms he's gleaned from reading Enid Blyton books. If any of the boys glower at him he scampers inside with a final cry of "Filthy street arab!" Flash forward fifty odd years and Martin is up to the same old tricks, only now he's making fistfuls of money for being a witless snob.

Lionel Asbo is a shambolic, unfunny attempt to take a Swiftian look at modern Britain. The title character is, first of all, not a character. Asbo is a grotesque caricature of a violent, alcoholic, half-witted thug, the kind who frequently ends up on the front page of the more lunatic British tabloids because of some depraved crime or an epic social benefits fraud. Asbo is so broad and blunt a caricature he belongs in a cartoon: he's like a vile, adult version of Dennis the Menace from The Beano. Come to think of it, the comic sophistication on show in the novel is on a par with that of The Beano. The story is set largely in the fictional London borough of Diston (Diston/dystopia, get it?), and the local school is called Squeers Free School. Wackford Squeers was the famously cane-wielding teacher from Nicholas Nickleby, which means Squeers Free stands for a lack of discipline! What wit!

Lionel Asbo is pretty much devoid of plot, or at least a plot that needs to be paid attention to. The first section of the story shows Asbo in all his yob glory, with Amis' curdled wit applied with a fire hose: Asbo has a ghastly accent! Shock! Horror! Asbo then wins a colossal amount in the lottery and the remainder of the story is an equally ham-fisted attempt to satirize the outer limits of celebrity culture; think Katie Price and the Kardashians. Amis fires all his satirical guns in the first third of the novel, so reading the rest soon becomes a real slog.

This is an epic failure as a comic novel, but as a piece of hate literature aimed at Britain's working classes you have to give Amis top marks. I mean, if you really want to dehumanize and ridicule an entire class of people this is the way to do it. Amis offers up a blanket sneer at everyone who, well, isn't just like Amis. Upper and middle-class people do make appearances in the story, and they endure some mild ridicule, but their main role is to act as social backdrops to make the awfulness of Asbo and his peers stand out in greater relief. Amis shows us a Britain filled with what he would call chavs, all of them doing their best to ruin everyone's lives, including their own. What makes Lionel Asbo hate literature is that Amis offers no context or explanation for why, in his view, the UK is overrun with louts; he simply lets fly at the underclasses with both barrels. He detests a certain demographic and is using this book to recruit people to his cause. This is all part and parcel of a recent trend in the UK to slag and mock the working classes by painting them as feckless, promiscuous, slope-browed layabouts. And by demeaning these people it becomes all the easier to deny them social benefits and political power. This trend is discussed brilliantly in a book by Owen Jones called Chavs: The Demonization of the Working Class, which, as it happens, I've reviewed here. If you really want something funny that's set amongst the Brit underclass, check out a rude, violent BBC sitcom called Bottom (my review here). Unlike Lionel Asbo, it's offensive without being truly offensive.
Posted by Cary Watson at 12:06 AM