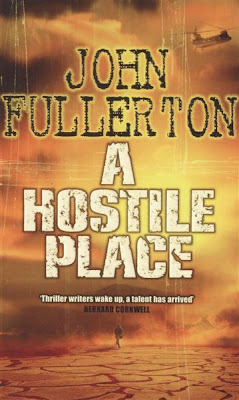 It took some guts to write this one. Imagine going to your publisher less than two years after 9/11 with an Afghanistan-set thriller in which your hero, a British mercenary, spends a goodly amount of time slagging the character and tactics of Bush, Blair and their assorted minions in their war against the Taliban. Not surprisingly, this book never got a US publisher or even a review by an American paper that I can find. That's a bit shocking, because even if you disagree with Fullerton's politics or his interpretation of events in Afghanistan, it's hard to deny the fact that based on this novel and This Green Land, his thriller about the Lebanese Civil War, Fullerton is the best writer going at combining action, intrigue, politics and some really fine prose.

The anti-hero of A Hostile Place is Thomas Morgan, an ex-British Army mercenary who's recruited by British Intelligence to be part of a team hunting down Osama Bin Laden in Afghanistan. Morgan has experience fighting in Afghanistan and even speaks one of the languages. Almost from the start Morgan senses that his handlers aren't on the up and up, and he's soon on the run across Afghanistan with no clear idea of whose pawn he is. Morgan is skilled, deadly and ruthless, but he's also keenly aware of the violence and injustices being heaped upon the Afghan people by the west, the Taliban and al-Qaeda. With the help of a young Afghan woman he manages to get himself on Bin Laden's trail, but he soon senses that someone is also following him.

The brilliance of this novel is that Fullerton is able to weave recent Afghan history and his own political opinions into the narrative without making the novel feel like a polemic. At times Morgan sounds like Fullerton's editorial spokesman, but those moments are infrequent, and Morgan is first and foremost a solidly crafted and believable character, not just a mouthpiece. The minor characters, especially the Afghan ones, are all nicely drawn, and Fullerton, as he showed in This Green Land, has an uncanny ability to bring landscapes alive through the written word.  Fullerton is an ex-journalist with extensive experience in Afghanistan and every bit of that experience, with some added righteous anger, has been used in A Hostile Place.