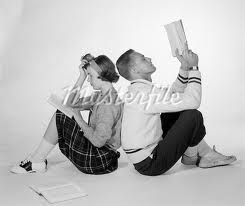 If you don't work at a library it's unlikely that you ever feel the need to take a detailed look at shelves and shelves of a particular literary genre. If, say, mysteries are your thing you might look over the selection at a bookstore, but you probably do an unconscious edit as you glance at the shelves, ignoring authors you don't like, covers you find unappealing, paperbacks vs. hardcovers, and so on. This past week I had to do a complete weeding of the teen section in one of Toronto's downtown libraries. It was an eyeopener.

The first thing you notice (and this also applies to teen sections in mega-bookstores like Chapters or Barnes & Noble) is that teen fiction might as well be labelled Teen Fiction For Girls. At least 70% of teen fiction titles are for girls only, with almost all of these books revolving around social and romantic problems in high school. The few titles that are aimed at teenage boys usually deal with serious issues such as drug abuse, broken families or crime. The rest are sports-themed or fall into the fantasy genre.

Looking through the teen section it comes as no surprise that teenage boys read so little. If I was a teenage boy browsing through this section I'd feel completely unwelcome: the message being sent by teen sections in libraries and bookstores is that only girls should be interested in reading. Adding to the problem is that so many of the titles aimed at boys are issue-oriented. These novels tackle social ills and evils in what seems like a transparent attempt to attract the attention of the people who order books for libraries, not the people who actually read them. So much of this literature seems written to "improve" the reader by discussing the issues that are "important" or "relevant" to him. The person who orders a gross of these books gets to feel virtuous, but their intended audience? Last time I checked, what teenage boys think is important are violent movies and video games; gross-out comedies; YouTube pranks, stunts and fails; naked and nearly naked women; and a bit of sports, especially the UFC. In other words, what this demographic wants is entertainment that comes with a near-toxic level of testosterone. Teen fiction rarely, if ever, delivers what boys want.

Teenage girls seem to get exactly what they want in teen fiction. As previously mentioned, teen fiction for girls is almost entirely about life in high school. Half these titles are blatant ripoffs of Twilight and Buffy the Vampire Slayer, while the other half are about affluent or wealthy girls dealing with romance and peer pressure while larking about in designer clothes in various U.S. glamour spots. The Twilight clones give girls action, horror and romance, and the glitzy, trust fund baby literature provides an abundance of wish fulfillment. There are issue-oriented novels for girls but they're almost crowded out by the stuff that screams entertainment value.


The literary merit of teen fiction is another question altogether; what's important here is that teenage boys aren't being catered for, and because of that their interest in reading is either stopped in its tracks or never developed. There are two possible solutions. The first is to divide teen sections into boys and girls areas. For various reasons I can't see libraries doing this, but I don't see why bookstores couldn't give this a try. The other alternative is to stop pointing teenage boys towards books written with a teen audience in mind. Teenagers in general can't wait to become adults, but I think teenage boys are even more eager to get to adulthood than girls. So why not feed them adult literature? Why, for instance, shouldn't a 15-year-old boy be reading one of Lee Child's Jack Reacher novels? They're no more raunchy or violent than what he's seeing online, and they're far more likely to get him in love with reading than a sociologically accurate story about a boy coping with a parent's divorce/death/alcoholism/hoarding problem/debilitating karaoke addiction. There's a ton of adult literature out there that boys would lap up, but no one's directing them towards it.

Once upon a time the rambunctious tastes of teenage boys were very well served. That time was the 1920s and 30s, the heyday of the pulp novel magazine. There were dozens and dozens of magazines that covered every conceivable red-blooded genre and they were hugely successful, with some magazines selling a million copies per month. These magazines weren't specifically aimed at teenage boys, but boys made up a large percentage of the readership. And the pulps weren't a literary wasteland: writers as diverse as Edgar Rice Burroughs, Raymond Chandler and Arthur C. Clarke wrote for the pulps, and there are few post-WW II American writers who don't credit the pulps with getting them interested in reading and writing. My love of reading probably stems from an encounter with the pulps at a very early age. In the mid-1960s Bantam began reprinting the Doc Savage pulp novels with stunning covers done by James Bama. My dad started reading them as an exercise in nostalgia. I saw him reading one and demanded that he read it out loud. Doc Savage was a two-fisted superhero who traveled the world punishing evildoers with the help of his eccentric sidekicks. The body count was usually very high. I never read another Hardy Boys novel after my first Doc. And somewhere around the age of fourteen I discovered my father's stash of James Bond novels and I never read another Doc Savage; in fact, it was about that time I stopped reading anything that was "age appropriate." The covers shown below should explain why I gave up on Tom and Frank. 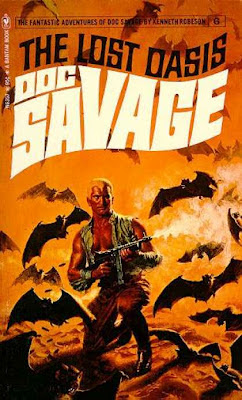 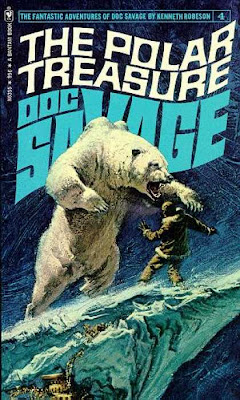 There is no contemporary equivalent of pulp magazines, and that's probably not helping the cause of getting teenage boys to read. There's no way to getting the pulp magazine business going again, but it's certainly possible to encourage teenage boys to check out the adult fiction writers who have a pulpy flavour, whether it's the writing team of Douglas Preston & Lincoln Child or Elmore Leonard. And there are teen fiction writers who do manage to deliver the goods for teenage boys, one of the best being Melvin Burgess. His novel Bloodtide has tremendous literary quality as well as more ferocity than a rabid Tasmanian devil. My review of it is here.

I loved this post. Thank you for sharing your thoughts. I agree with giving teens adult books. Why not?

Thanks, Midnyte. No one thinks twice about letting teens watch adult movies or TV shows, so why not adult literature?

This is also a major reason I ended up writing a YA epic fantasy with not one, but two male protagonists. I'm hoping, when it's finished and finally published, it'll appeal to both genders. I think there should be more of an emphasis on writing YA books that both genders will like.

Myself, I don't touch the high school books much anymore. The plots are becoming generic and many of the girls are just too catty for my taste.

Michelle,
Yes, YA books should appeal to both sexes, and strong stories and characters will always appeal to boys and girls. The problem is that publishers tend to market to one group or the other, not both.