Book Review: Attack of the Theocrats! (2012) by Sean Faircloth 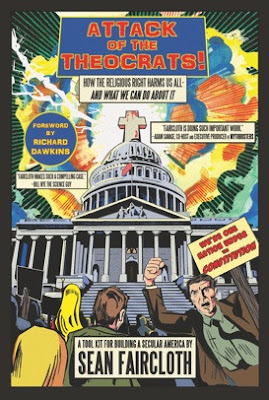 You don't have to look very hard to find juicy targets if you set out to savage the excesses and idiocies of the religious right in America, and Sean Faircloth certainly takes some hefty swings at some low-hanging fruit. Not that there's anything wrong with that. Egregious religious hucksters like Joel Osteen need to be bashed every day of the week and twice on Sundays. Fortunately this book isn't just a roll call of crimes and misdemeanors perpetrated by God botherers, as the English like to call them. Faircloth, a former member of the Maine legislature, also wants to make his book a call to arms against the very real constitutional and legal crimes committed in the name of religiosity, as well setting out some policy ideas on how secular Americans who value the constitutional requirement for the separation of Church and State can take back their country from the likes of Pat Robertson and his (overwhelmingly) GOP allies.

One very important point that Faircloth brings up is that religion in America, at least the kind that inhabits megachurches and shouts from TV screens, is a business. Thanks to a wide variety of tax breaks and subsidies that are intrinsically unconstitutional, people who once upon a time would have been selling lightning rods or baldness cures on street corners are now in the religion business. Religion can be very, very profitable in America. And like any other industry it strives to stay profitable by putting pressure on politicians to grant them favours. In this regard fundamentalist preachers and organizations are no different from pressure groups like the NRA. In relation to this, Faircloth points out that the majority of Americans (according to various polls) would prefer a more secular country and a reining in of the influence held by the religious right. Like the NRA, fundamentalists are the tail wagging the Washington dog thanks to their money, willpower and organizational ability.

This is a slim book, and there isn't a lot of new information here for readers who've paid even minimal attention to this issue over the last couple of decades. It is, however, valuable for two reasons. The first is that Faircloth provides a tidy and trenchant guide to the secular ambitions of America's founding fathers. If you know someone who likes to declare that the founding fathers were devout Christians and wished to create a Christian country, just have them read chapter two of this book and they should shut up pretty quick. The second valuable lesson that comes from this book is that it shows how hard it is for Americans to escape from the tar pit of their own myth-making. And surprisingly, it's Faircloth who's stuck in the tar pit.

Here are two Faircloth quotes from the book:

"American is still the greatest nation on earth because of its commitment to equal treatment under the law, its protection of minority rights, and its separation of Church and State under the Constitution."

"America is the greatest nation on earth--because of our constitutional ideals and founding principles."

The problem here is that Faircloth is using the same language, expressing the same vision, as every oily preacher and teary-eyed Tea Party congressman. They may disagree on what constitutes greatness, but they all agree that America is number one with a bullet. This is lazy, jingoistic thinking. Faircloth's definition of greatness is based on a set of laws and legal principles, which is fine except that a large number of other democracies can easily claim that they have similar or identical laws. And the actual enforcement of those laws should be the barometer of "greatness" not the fact that they're on the books. Declaring on any and all occasions that America is the greatest nation on earth sometimes seems to be the right and duty of every politician, pundit and Joe Citizen of the U.S. of A. no matter what their political stripe. It's a dangerous thing when people, especially politicians, say that they're inhabiting the greatest nation. It's normally the case that countries that are overly fond of declaring global supremacy are either delusional (North Korea) or employ armies of flinty-eyed men in trenchcoats who make sure the citizenry is nodding vigorously in agreement (the former U.S.S.R.). And the word "greatest" implies that a kind of perfection has been achieved. Why change anything or tolerate dissent when you're the greatest? No nation is the greatest. Well, Norway probably is according to all those U.N. health and happiness surveys that come out every year, but I don't think I could put up with those long winter nights and tacky troll dolls everywhere. The point is that throwing around the "greatest" tag when referring to nations is usually a sign of the worst kind of nationalism.

The "greatest nation" trope in American culture and politics is also what might be the chief prayer in what I'm going to call the Church of America. I'd argue that what's known as the religious right is actually a new, hybrid religion that's composed of equal parts capitalist boosterism, white ancestor worship, rabid nationalism, militarism, and a patina of Christianity. As Faircloth accurately points out, the religious right rarely behaves in a Christian fashion. They, unlike Christ, have an actual dislike for the weak, the meek and the poor, and they're definitely not peacemakers. As Faircloth says, the religious right has taken bits and pieces from the Old and New Testament to craft a religious outlook that ennobles capitalism, praises warriors and denigrates scientific thought. The best evidence for this hybridization is the so-called "Prosperity Gospel" which basically turns God into the Uncle Money Bags character from the game of Monopoly. Play the faith game the right way, says the Prosperity Gospel, and you'll be rewarded with riches.

Faircloth thinks he's simply fighting theocrats, but the Church of America is a more complex beast. Arguing the fine points of scripture with C of A worshipers is only part of the battle. The C of A worships America as an abstract concept. Their America is a holy place created by and for white people in which a love of both capitalism and anti-intellectualism are as important as the love of Christ. This blend of religion and nationalism has happened before in places like Russia and Spain, but in those cases organized religion played a central role. In the US, the C of A is a big tent under which groups like the NRA, fundamentalists, libertarians, birthers, white supremacists, and creationists take shelter. All these groups see America as a quasi-religious entity, and so any criticism of America, from whatever angle or with whatever intent, is perceived by them as an act of blasphemy. So when Faircloth advocates pushing back against the theocrats, I don't think he quite realizes the size and character of the hydra he's up against. Any attack on a single branch of the C of A is seen as an attack on all.

Visual proof of the existence of the Church of America is everywhere in the US. If you've never visited America one of the strangest things to be seen is the omnipresence of the country's flag. It's truly everywhere, from clothing to advertisements to the front porches of houses big and small, and in pin form it's worn on the lapels of rich and poor alike. This fetishization of a flag was and is the norm in totalitarian states, but the US is the only country in which it's been done by popular choice--the land of the free and the brave, and star-spangled, theocratic Don Drapers.
Posted by Cary Watson at 7:01 PM