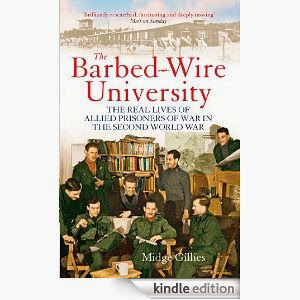 There have been dozens and dozens of Second World War memoirs written by former Allied POWs that revolve around escapes of various kinds. This book attempts to describe life as it was lived by the vast majority of POWs, the ones who weren't busily engaged in tunneling, forging documents, crafting disguises, or, in the case of prisoners at Colditz, building a glider for an airborne escape. Gillies does a decent job, but there are some strange gaps that make this a less than complete history. But first the good bits:

One thing that comes out of this history is that the Nazis were strangely more humane towards their POWs (the English-speaking ones, at least) than they were to, well, everyone else. Life in a POW camp in Germany wasn't pleasant, especially as food become scarce in the last months of the war, but on balance it was a dull but tolerable existence. Red Cross parcels came through on a regular basis, as did the occasional parcel from loved ones back home. The prisoners kept themselves amused or stimulated with sports, hobbies and informal educational courses in everything from languages to automotive engineering. A sign of how relatively civilized life as a POW was can be gauged from the fact that prisoners were able to take correspondence courses from English universities and "graduate" with degrees. That's right, being a POW in German hands could actually lead to career advancement. The situation of POWs in the Far East was radically different. The Japanese treated prisoners with a uniform brutality that resulted in tens of thousands of deaths. This was one of the great war crimes of WW II and if nothing else Gillies' book is a reminder of an institutionalized atrocity that went largely unpunished.

The inventiveness and ingenuity of POWs is one of the highlights of the book. Even with the most minimal of raw materials POWs were able to create everything from drugs to radios to, yes, a glider. Not only is this a testament to their creativity, it's also makes one realize that a similar group of modern men would probably be utterly hapless--our grandfathers were handy, we're computer literate. No prize for guessing which group would cope better in a POW camp.

The book's faults are most apparent at the end. Gillies doesn't discuss whether POWs, especially those in Japanese hands, took any reprisals against their former captors. There's a brief mention of POWs in a German camp killing a couple of SS men, but it begs the question of whether this was a common event or not. And the question of whether any Germans or Japanese were tried for war crimes for their treatment of prisoners is ignored entirely. In fact, hundreds of Japanese were tried for war crimes against POWs and many were imprisoned or executed. And yet another subject that gets no attention is that of POWs who collaborated with their captors. Did it happen? And, if so, how often and to what degree? The worst oversight Gillies makes is announced in the book's title, the full version of which is The Barbed-Wire University: The Real Lives of Allied Prisoners of War in the Second World War. That's funny, I thought the Russians were one of the Allies. There is absolutely no description of life for Russian POWs. There are a few, stray mentions of them, but the title of the book should really be changed to the Real Lives of British Prisoners. It also would have been useful to be given a rough idea of how the Allies dealt with German POWs. If you've never read anything about POW life in WW II this book serves as a low-calorie introduction, albeit from an almost entirely British perspective, but clearly there's room for a more balanced and comprehensive history of the subject.
Posted by Cary Watson at 11:09 PM