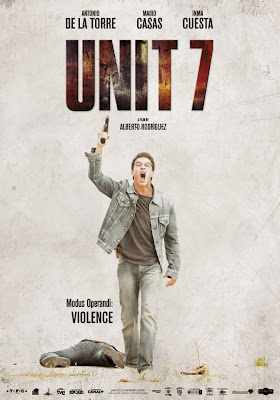 If there's a film genre that's deader than the western it's cop films. Cop dramas are alive and well on TV; in fact, it's probably the case that the glut of cop shows on TV kills any appetite the public has for seeing them in the cinema. The plethora of TV westerns in the 1960s is often cited as the reason for the extinction of the genre, so we're probably seeing the same process at work with cop films. By cop films I don't mean buddy cop films like the Lethal Weapon franchise or the Die Hard films, which are essentially blue collar James Bond adventures. When I say cop films I'm referring to the cop noir genre (my own description; more details here) that emerged in the '70s with The French Connection. Cop films of that era were grittty, realistic and were thematically linked by their examination of the rotten heart of  big cities. To put it in a nutshell, cop noir films took an unrelentingly dystopian look at urban life.

Good news! Some cop noir films are still being made and Group 7 is one of the better ones I've seen. The title refers to a four-man squad of cops tasked with cleaning up the drug business in Seville, Spain, in 1988. The civic authorities want the crackdown because Seville is hosting the World's Fair in 1992 and they're keen to present a clean and shiny face to the world. Our heroes take to the job with gusto, cracking heads, leaning on informants, and generally making a name for themselves as they put a big dent in the local drugs trade. Along the way, however, they decide that they should take a taste of the business themselves. They install an ex-madam in an apartment block and make her their tame drug dealer. After two years Group 7 has become locally famous and is hated by both other cops and members of the criminal underworld. Internal Affairs gets after them, as do some local criminals.

Group 7 has the look and feel of cop noir down pat, but what makes it pleasurably different is that it doesn't end in any of the expected ways. There is a shootout towards the end, and some scary moments for individual members of the group, but there's no attempt to tie up loose ends. The film ends with the cops going off in different career directions, and we're left with is the realization that the local war on drugs has been utterly pointless and futile; nothing more than a PR exercise that's taken a fearful toll. The more things change...
Posted by Cary Watson at 6:50 PM