Closed to the Public, Open for a Coup 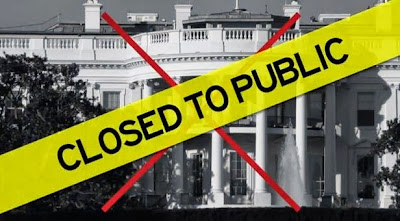 What's really scary about the current debt ceiling crisis in the US isn't the prospect of a recession/depression if the US defaults on its loans, it's that what we're seeing is the endgame in a concerted effort by Republicans and their various backers, from middle-class white God-botherers in the South to the Koch brothers in New York, to finally "break" the federal government, to reduce it to an organization with only two purposes: to maintain a strong, belligerent military and to facilitate the growth of corporate profits. And worse still, this goal will be achieved after a "soft" coup that will formally end America's fragile status as a democracy.

The economic chaos that would result from a default is exactly what the far right of the Republican Party wants. Why, you ask? In chaos lies opportunity. Democracies that fall into crisis almost  inevitably see a shift in political power at the next election. The party or president or prime minister in power when the crisis arises or reaches the boiling point invariably gets the blame for the situation (rightly or wrongly) and is turfed. The Republicans are engineering such a crisis with an eye on the 2016 elections. If a default occurs the GOP will go into the next election labeling it "The Democrat default" in the same way they disparagingly labelled the Affordable Care Act as Obamacare. Whoever has the thankless job of running for the Democrats in 2016 will go down in flames, and a Republican will move into the White House.

This is when the coup will take place. The corrosive, anti-democratic course of US politics will be strengthened and the way paved for permanent Republican rule. How? Congressional districts will be gerrymandered even more than they are now; further tightening of voter registration laws will take the vote away from minorities and the poor; and corporations, already the de facto fourth branch of government thanks to the Citizens United v. FEC ruling, will be granted greater powers to fund and influence election campaigns. I call this a soft coup because there will be no riots, no tanks on the White House lawn, just the quiet shuffling of papers as laws are passed that turn America into a Republican-run, theocratic kleptocracy.The rationale the Republicans will give for their draconian laws and regulations is that the "old" way of governing is broken--the debt crisis proves that a new order is needed in American politics so that nothing like that happens again. And here's where I may run afoul of Godwin's Law, but I'll go ahead and say that a fiscal default in the US could prove to be the American equivalent of the Reichstag fire.

Are Republicans crazy enough to push the US into a full blown recession? Based on the visceral loathing large elements of the Republican Party have for Obama, government, liberals, minorities, the Democrats, and the media (excluding Fox News) it's certain that they've reached the right emotional temperature for radical action. And a non-fiscal issue may be what pushes them over the edge. Obama's tentative steps towards a rapprochement with Iran hits all kinds of right-wing panic buttons. Rightist think tanks, political commentators, and members of Congress are unanimous in their hatred and distrust of Iran. And just this past week Benjamin Netanyahu, Israel's prime minister, gave a speech at the U.N. in which he bluntly told the world, but more specifically the US, that Israel wants no part of negotiations with Iran. It's no secret that Netanyahu can't stand Obama, and it's equally true that Israel has the ear (and several other body parts) of the Republican Party, especially its more evangelical members. It might serve Israel's foreign policy interests to have Obama distracted and weakened by a full-blown economic crisis, and if Israel sees it that way I don't doubt they'll drop a word in the right places in Washington.

It's also entirely possible that the Republicans will end up the losers in this fight, reduced to looking like a pack of cranks and fiscal Luddites who will be savaged in the next election. That's a plausible outcome but even if it does come to pass the anti-democratic elements in the GOP won't be going away any time soon, and if they do lose this fight they'll simply bide their time until the next opportunity arises to throw a spanner in the works.
Posted by Cary Watson at 4:28 PM