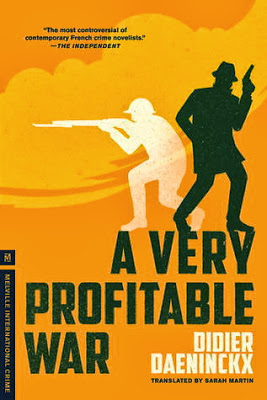 If, like me, you relish crime fiction that has a political component, then you're resigned to the fact that your choices will be restricted to authors writing in languages other than English, which means the supply of such fiction is limited by what editors and publishers think is worth translating. UK and US crime writers seem gun shy when it comes to politics. They'll sometimes take notice of the symptoms of bad or corrupt political decisions (poverty, urban decay, racism, etc.), but they generally avoid tackling politics head-on. The late Elmore Leornard, for example, set at least a dozen novels in Detroit, a city that has come to symbolize all that is wrong and dysfunctional in American society and politics. But Leonard doesn't have anything to say about the whys and wherefores that turned Detroit into an urban wasteland. He records the symptoms of Detroit's decline but has no apparent opinions on why this has come to pass. The same neutral attitude towards societal ills is a commonplace one with a great many of his English language contemporaries.

Non-Anglo writers such as Massimo Carlotto, Yasmina Khadra, Dominique Manotti and Didier Daeninckx wholeheartedly embrace the political. For them, crime is inextricably linked with political decisions and the political zeitgeist. Their novels reflect the fact that politics and society can have as great a role in fictional murder and mayhem as traditional motives like greed, jealousy and rage. A Very Profitable War is set in Paris in 1920, and our hero is Rene Griffon, a veteran who was recently in the trenches and is now a private eye. He's hired by a retired general who's being blackmailed over his wife's serial indiscretions. What begins as a simple case of marital infidelity turns into a story about war crimes, radical post-WW I politics in Paris, and corporate greed.

The political themes don't make the novel dry or preachy; quite the contrary. Daeninckx's prose style is positively ebullient, full of jokes and energy, and the same can be said about Rene Griffon. As in his Murder in Memoriam (review here), Daeninckx wants to lay bare some of the dirty secrets from France's past. In this case he's concerned with the repression of anarchist and communist movements during and just after the war. These issues add some depth and resonance to the novel, making it more than just an exercise in style and mood. And style and mood is what too many contemporary crime fiction is all about. A great deal of noir or hard-boiled crime fiction works hard to create a gritty, sour, dystopian worldview, but the authors have little interest in explaining why these conditions exist; instead we get a lot of characters (including the sleuths) with deep and dark psychological problems that must be talked about at great length. There's certainly room for both kinds of crime fiction, but it would be nice to see more agitprop writing on the English language side of the ledger. After all, it was Eric Ambler, an English writer, who invented the politically-informed thriller. One American crime writer with a taste for politics is K.C. Constantine (read my piece on him here), although I think he's currently retired from writing. He offers an interesting comparison with Elmore Leonard. Constantine set all his crime novels in a small area of rural Pennsylvania, and he isn't shy about describing the political errors and crimes that have ruined the lives of people in that part of America. Leonard's resolutely apolitical stories stand in stark contrast to Constantine's, although in many ways they are literary blood brothers.
Posted by Cary Watson at 11:44 PM

I love books set in or around WWI. When I was a child my uncle told me amazing stories of what the war was like, and how they survived. I am looking forward to reading Daenickx's book. Another great thriller is the book, "No One Can Know" by author Adrienne LaCava. http://adriennelacava.com/ The book is set in the backdrop of the 1960s during the JFK assassination, which begins as a CIA agent as a witness who must now go into hiding at the ranch. A unique hook around a still riveting, real mystery. Loved it!

For WW I books you might want to try Sebastian Japrisot's A Very Long Engagement or Siegfried Sassoon's Memoirs of an Infantry Officer. I'll see if we have the LaCava book at the library.