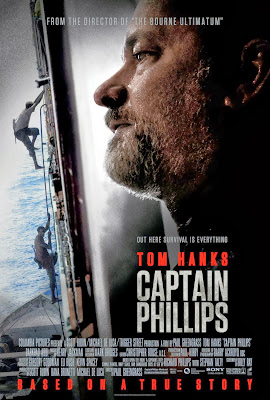 The first thing that struck me about Captain Phillips is that there is no such thing as a closeup shot that's too close for director Paul Greengrass. He's made his name with docudramas such as Bloody Sunday and United 93, and he brought a rigorously documentary look to two installments in the Bourne franchise (Supremacy and Ultimatum). His cameras are almost always handheld and usually kept within bumping distance of the actors. Captain Phillips is more, much more, of the same. It's yet another docudrama, this time about the capture by Somali pirates of a US container ship off the coast of Somalia in 2009. The titular captain was held hostage by the four pirates in a lifeboat after they abandoned the cargo ship, and after several tense days Phillips was rescued by US Navy Seals.

That's the nuts and bolts of the story, and Greengrass tells it in a resolutely nuts and bolts style. There's no superfluous action or characterization on display here; everything's stripped down to the basics, much like the cargo ship Maersk Alabama, which is nothing more than a floating steel box with a bunch of moving parts. Action-thrillers don't get sparer or more stripped-down than this one. The closeups are what really create the tension in the story because the faces that are zeroed in on are almost always expressing anguish, anxiety or sheer terror. In some respects Captain Phillips is simply a very big budget version of those docudrama TV shows in which various disasters or bizarre murder cases are recreated using actors not quite good enough for infomercials. But when you've got millions to play with you can hire Tom Hanks.

Hanks is the glue that holds this film together. He's played Everyman roles like this one before, but the difference here is that he can't show a spark of his trademark wit or charm. Phillips is all business, which is established early on with some tetchy comments he makes towards the crew about lengthy coffee breaks. There's no glamour in this character, no heroics, just a dogged determination to do the right thing and to do it by the book. Like Phillips, the crew are shown doing their jobs and nothing more; no joking around, no longing looks at pictures of loved ones, just a bunch of guys caught in the wrong place at the wrong time and really, really upset about it. The dispassionate portrayal of Phillips and his crew members certainly adheres to the film's documentary aesthetic, but it also takes some of the edge off the tension. Phillips & Co. are presented to us as depersonalized, maritime drones. A touch more character development might have made their plight more dramatic. Interestingly, the four pirates are given more of a back story than the crew. The script makes it clear that the "pirates" are living in poverty, taking the only paying job available to the them. The real money is made by the warlords and tribal elders who own the boats. The pirates who actually board the ships are working for minimum wage.

Captain Phillips is brutally effective and efficient in telling its story, but it lacks a certain humanity that would have made it really memorable. It's telling that the most human and intense moment in the film comes at the very end, shortly after Phillips has been rescued. He's being examined by a Navy doctor and as he tries to answer the doctor's questions he suffers a nervous breakdown. It's not a showy or hammy piece of acting by Hanks, but it's stone cold brilliant, and if they awarded acting Oscars for two minute film segments he'd have it nailed. It's also the one scene in the film that will probably linger in your memory.
Posted by Cary Watson at 9:27 PM

Great movie with amazing acting. It appears to stay very in line with the actual events and story. Tom Hanks is so good in this movie!!

This is a really good movie. I was bored one night and decided to watch this movie and it was an excellent choice. I am actually ready to watch it again because it was so good. Tom hanks was perfect for his role as the captain of the ship.