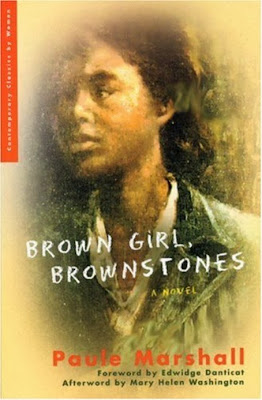 A little while ago I reviewed Jonathan Lethem's The Fortress of Solitude, a partly brilliant, partly dopey, semi-autobiographical novel about growing up in Brooklyn in the 1970s. Brown Girl, Brownstones is also semi-autobiographical, but is set in the Brooklyn of the '40s and '50s, and is centred in a tight-knit community of Barbadian immigrants. This is what makes this novel an interesting companion piece to Lethem's book. The biggest problem I had with his novel was the portrayal of the black characters, almost all of whom were criminals or drug addicts. Brownstones, which was written by a Barbadian-American woman, provides a stark contrast in its view of its black characters.

The central character in Brownstones is Selina, one of two daughters of Sella and Deighton Boyce. The family, like most of their fellow Bajans, are struggling to get by. The Bajans take menial jobs as cleaners and domestics, and every family's dream is to buy one of Brooklyn's large, iconic brownstone row houses and rent it out its rooms to the next wave of immigrants. The difference with the Boyce family is that Deighton is a professional ne'er do well. While Sella works all the hours of the day, Deighton lounges at home, takes the ocassional job, and visits his mistress. Needless to say, Sella and Deighton have a fraught relationship. Sella is the polar opposite. She is consumed with a desire to get ahead, to own a piece of property and then become a landlord, preferably in the more middle-class environs of Crown Heights. Sella's ambition and drive turn her into a kind of monster to her children, especially Selina, who worships her father. As Selina enters adulthood and goes to college she begins to feel torn between the expectations of her mother and the Bajan community, and her own desires to be part of a larger world.

Brownstones features some sharp, evocative writing, especially in its portrait of Brooklyn from an immigrant's point of view. What makes it special is that these are black characters seen without looking through the usual prism of white society or white characters. Towards the end of the novel Selina makes an uncomfortable acquaintance with the larger white world, but the majority of the novel is a character-focused study of hardscrabble immigrant life and the terrible toll it can take on both family and romantic relationships. Racial issues aren't of primary concern here. The end of the novel loses its way somewhat thanks to some editorializing and an unsatisfying ending, but it's certainly one of the better literary studies of immigrant life that I've come across.

Check out "Small Island" by Andrea Levy about the experience of Jamaican immigrants in London during WW2.

I've had that one on my radar before. Thanks for the recommendation.