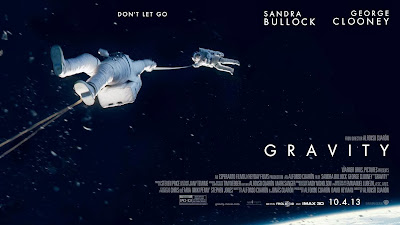 I've never been a fan of 3D films, and I've yet to see a film that was improved by its use. Until now. Gravity in 3D looks great and probably gives us earth-dwellers a very real sense of what it's like to float around in space. In fact, at times Gravity feels less like a feature film and more like something you'd see at a science centre planetarium. The film's technical excellence doesn't, however, save it from being a bit ho-hum and downright clunky in some areas.

The film begins with Bullock and Clooney's characters (she's Ryan, he's Matt) floating outside the space shuttle making repairs to the Hubble space telescope. And here's where things get off to a rocky start. If your attention isn't completely diverted by the space scenery you'll notice that Ryan and Matt are having an utterly ridiculous conversation. It's been established that they've been in space a week at this point, which is in addition to whatever training goes on before one of these flights, and yet they talk as though they only met five minutes ago. Matt actually asks her where she's from! The scriptwriter is frantically trying to provide some backstory for the characters in the few minutes available to him before the shit hits the fan but this is a desperately clumsy way to do it. And why was it decided that Matt should be the most cliche astronaut since Buzz Lightyear? He listens to creaky country music as he works; he wisecracks with Mission Control; he's seen it all and done it all in space; he's supernaturally calm under pressure; and he's brave, brave, brave.

The probable reason for Matt's outsized personality is that about twenty minutes into the film he's killed off. He's been setup to be the omni-competent hero who'll figure out how to save the day once the space shuttle is destroyed by a cloud of space debris, so his death (a noble act of self-sacrifice) is intended to act as both a shock and as a way to ratchet up the tension. How will the inexperienced, terrified Ryan manage to save herself? Matt's death actually does a lot of damage to the film. For one thing he's a more engaging personality than Ryan, even if he is a grab bag of heroic cliches. Ryan spends the rest of the film whimpering, shrieking and crying, which gets a bit wearing after a while. She's no Ellen Ripley. The bigger problem is that Matt's death drains a lot of tension out of the film. The film's still got more than an hour to go and since Ryan's the only character, we know she's going to survive until the end. Her struggles and hairbreadth escapes are visually entertaining but they don't produce much tension.

The mechanics of Ryan's journey from a wrecked space shuttle to a successful landing back on Earth are poorly handled. The fact that it's all wildly improbable isn't the problem. What's annoying is that we're not allowed to understand the nuts and bolts of the technical challenges she faces. Scene after scene has Ryan pushing buttons and flipping levers, but it's all meaningless to the audience. Apollo 13, the only film comparable to this one, did a far better job of making us understand the technical challenges faced by astronauts in peril. Gravity succeeds brilliantly as a visual extravaganza, but the storytelling isn't up to the same standards.

Thank you. Finally! I thought the dialogue was horrible, childish, and stilted.

Yes, the dialogue was pretty bad, especially all that monologuing by Bullock.

While the screenplay may not be that good, the visuals and overall feel of the movie are that good and make it so much better. Nice review Cary.

Thanks, Dan. The visuals are astonishing. It's one of those films you really do have to see in a theatre.

One can easily imagine Robert Louis Stevenson or H Rider Haggard getting a kick out of Gravity.

The plot is one-track, the cast minimal and the pace leisurely. But it's a real pleasure to experience space in a movie without an alien in sight.