Book Review: A Brief History of the Samurai (2010) by Jonathan Clements 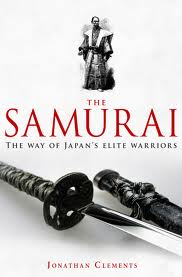 To be honest, the real reason I read this book was to satisfy my curiosity about the historical reality of samurai films. Are they as mythical and over-the-top as, say, American westerns? As it turns out, samurai films don't stray too far from the historical truth. A case in point: in the recent samurai film 13 Assassins (review here), a small group of samurai must defend themselves from 200 warriors. One of their defensive tricks is to set fire to the backs of several bulls and send them careening angrily into the heart of the opposing forces. It's the kind of scene in an action movie you laugh at while at the same time applauding the filmmaker's crazy ass imagination. Well, it seems that there wasn't any imagination involved. During one of Japans interminable civil wars one army released a herd of flaming cattle into the ranks of their opponents. It worked a treat. And I have to wonder if just before the blazing herd hove into view one luckless samurai turned to another and asked, "Do you smell something good? I don't know why, but I've got this sudden urge for some Kobe beef."

Although this is supposed to be a history of the samurai, it would be more accurate to say that it's a lean and efficient political and military history of Japan from the Dark Ages up to the 1860s. It's not a pretty or noble history. For century after century Japan was consumed with civil wars and insurrections pitting clan and against clan. These bloody conflicts were often spectacular but, in essence, they were no different than the various turf wars between New York's mafia families. It was all about acquiring land and wealth. Militarism and intramural conflict so gripped Japan's ruling classes that there was little energy or wealth left over to develop the arts or sciences. The lack of vision or curiosity amongst Japan's ruling classes reached its zenith in the 1630s when the Shogun decided to effectively seal Japan off from the outside world. For the next 200 years Japan was preserved in amber.
But back to the movies. Yes, the samurai were as ferocious and honour-obsessed as the films tell us; swordfights could erupt over points of etiquette, and seppuku (ritual suicide) was frighteningly common. What the movies don't tell us is that seppuku became a samurai favourite because it was the most painful way to die. It gave a wonderful, final boost to a samurai's street cred. Films usually show a warrior slicing himself once, groaning, and then keeling over. It was much nastier than that. Jonathan Clements, the author, does an excellent job of compressing a lot of history into a fairly short book, and his writing style is more populist than academic. But, like I said, I'm just glad that a great samurai film like The Sword of Doom (review here) turns out to have a basis in fact.
Posted by Cary Watson at 9:46 PM

Email ThisBlogThis!Share to TwitterShare to FacebookShare to Pinterest
Labels: 13 Assassins, A Brief History of the Samurai, Jonathan Clements, samurai, The Sword of Doom