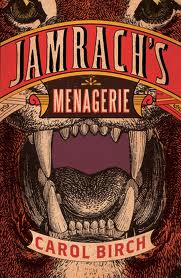 For those of you thinking that Patrick O'Brian can't be equalled in the field of naval historical fiction, let alone historical fiction in general, introduce yourself to this novel. Jamrach's Menagerie would leave O'Brian green with envy, and possibly green with nausea after reading the climactic final section of the novel, but more about that later. With this novel Birch isn't simply trying to one-up O'Brian, she's bringing an intense emotional and spiritual richness and lyricism to the story of an adventurous voyage to the Far East in the mid-Victorian era.

The protagonist is Jaffy Brown, a Dickensian urchin living in the slums of London. At the age of eight an escaped tiger picks him up in its jaws and holds him like a toy until Mr. Jamrach, the owner of the tiger, rescues Jaffy and returns the tiger to his menagerie. Jamrach is a dealer in exotic animals, and out of a sense of guilt he gives Jaffy a job at the menagerie. Jaffy prospers at the job and becomes a close friend to a boy his own age, Tim, and Tim's twin sister Ishbel. At the age of sixteen, Jaffy and Tim are sent by Jamrach on a voyage on a whaling ship that's heading to Java. Dan Rymer, Jamrach's second-in-command, is in charge of the boys and he's also tasked with capturing a Komodo dragon. Jaffy and Tim are to help with the capture and will then mind the beast once it's on board ship. The dragon is captured, but a few weeks later the ship is sunk in a storm and the surviving crew, including Jaffy, Tim and Dan, find themselves in lifeboats in the middle of the Pacific. Things go from bad to worse to unbearable. And those with delicate stomachs are advised to lay in a supply of Gravol before reading this lengthy and gruesome part of the story.

The seafaring sections of this novel rank right up there with the best that have ever been written. Her descriptions of life on board ship, the bloody reality of whaling, and the dynamics of friendships and hatreds on a long and stressful voyage are superb. What makes these sections especially brilliant is that Birch doesn't let historical details get in the way of her storytelling, something David Mitchell couldn't manage in his overly praised historical novel The Thousand Autumns of Jacob de Zoet (review here). Birch tells a spellbinding story, but one that's also imbued with a ferocious attention to the emotional and psychological state of the characters. Jaffy goes through hell and Birch makes us feel every bit of his pain by showing his existential despair at what Fate has done to him. Without this added layer the lifeboat section of the story would be merely horrible instead of the harrowing masterpiece it is.

The novel is richly detailed, which is usually the norm in historical fiction, but it also features some of the finest prose I've read in quite a while. Birch is endlessly inventive in describing the physical world, and, when needed, she can write with brutal realism or poetic dreaminess. If there's one quality that moves this novel into the realm of greatness is its humanity. This is primarily a novel about friendship, loss, love, coming to terms with mortality, and the pain of realizing that life can be cruel and capricious and unfathomable; all the stuff that makes being human wonderful and horrible. The only miniscule flaw I could find in the novel is that in the initial London sections Birch tries a little too hard to create a suitably Dickensian tone. Aside from that, Jamrach's Menagerie is pretty much flawless and totally unforgettable.
Posted by Cary Watson at 12:53 AM