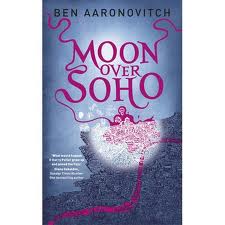 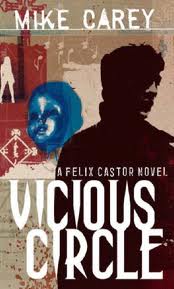 I'm reviewing these two supernatural mystery/thrillers together because the authors are creatively joined at the hip. Both have created an alternate reality London in which the supernatural is very real and very dangerous.

Aaronovitch's previous novel featuring DC Peter Grant was Rivers of London (my review here), and it was a very successful attempt to combine the world of the supernatural with a police procedural. It sounds unlikely, but he pulled it off. The only serious problem with Rivers was that the plotting was weak, with a major sub-plot about the gods of London's rivers going nowhere. Moon is equally entertaining, but also suffers from plot problems. The story this time revolves around the mysterious deaths of various jazz musicians, and then there's the strange and dangerous Pale Lady, a woman with a very feline personality. Moon is a very fun read, but once again Aaronovitch does a poor job of handling multiple storylines. The Pale Lady story eventually connects with the deaths of the musicians, but it's not obvious how or why it does. Or maybe I just wasn't paying enough attention.

Mike Carey has no problem with plots. His novels are rich with incident and detail, and the plots are well-developed. In the second Felix Castor novel (the first is reviewed  here) Felix is up against a cult seeking to raise one of Hell's fiercest demons. Carey takes the private eye route with his novels, making Castor a Philip Marlowe of magic. The previous Castor novel was way too long, and this one is also a bit prolix. One example: long after Carey has established that Castor is good at picking locks, he has his hero give a long description of a lock he ends up not picking. Simply put, Vicious could be significantly leaner with no drop in literary quality.

An interesting thing about Aaaronovitch and Carey is that they make London one of their main characters. In both novels the action rarely moves out of the city, and the authors are almost loving in their descriptions of the city's streets, buildings and neighbourhoods. Both writers are also equally good at world-building. London invaded by the supernatural seems quite likely in the hands of these writers. Finally, the Grant and Castor novels deserve to be praised as mysteries every bit as much as they get respect as supernatural thrillers. Plot problems and prolixity aside, these writers create more  mystery and excitement than a great many straight mystery writers.
Posted by Cary Watson at 8:35 PM