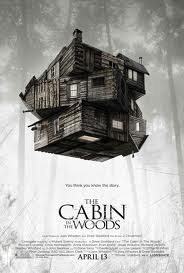 The slasher/horror genre, like zombies and vampires, just goes on and on and on, and it produces almost as many spoofs and variations on the theme as it does straight horror films. The Cabin In the Woods is the latest attempt to add a twist to the slasher film and it succeeds, but only to a degree. The variation in this case is that the college kids who make the unwise decision to visit a lonely, spooky cabin in the wilderness for a weekend of booze and sex have actually been lured there by some governmental(?) organization that needs warm bodies for a ritual sacrifice. Below the Earth, it seems, lie ancient, evil gods who wish to ravage humankind; the only thing that holds them back is a yearly sacrifice of five young people. The gods find that a sacrifice that takes the form of the plot of a horror movie is very pleasing. This means that the world's nations covertly run real-life horror movie scenarios in an effort placate the gods.

High concept doesn't come much higher than this, and bits and pieces of Cabin succeed, but overall it's just an OK film. The scenes set in the control centre where the ghouls and kids are manipulated by geeky techies are clever and fun and give the film its originality. Unfortunately the third or so of the film that's all-slasher is all-dull. The slasher genre is almost completely played out (hence the existence of this film), and even in this case, a deconstructed slasher film, the chasing, screaming and killing is strictly paint-by-numbers. The longer the film goes on the more you want to get away from the cabin and see what's going on at the control centre.

Of course the main inspiration for this film comes courtesy of H.P. Lovecraft, whose horror short stories often featured unnamed ancient gods who were constantly threatening to break through into our world. Lovecraft had a feverish, if limited, imagination, and the same could be said of Cabin. The horror movie command centre, complete with its stable of ghosts, killers and monsters, is a great idea that deserves it's own movie. Mind you, more time in the command centre would be require filling in some of the enormous plot holes. The story doesn't have an ounce of internal logic, but its energy and humour papers over that problem more or less successfully. Cabin is half good, half meh, but the good half is a lot of fun.
Posted by Cary Watson at 5:01 PM

Email ThisBlogThis!Share to TwitterShare to FacebookShare to Pinterest
Labels: H.P. Lovecraft, The Cabin In the Woods