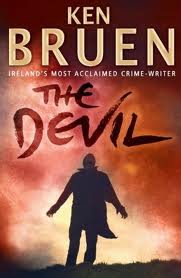 WTF? I say again, WTF? This is my first Ken Bruen novel, and I had understood that he's a crime writer, but what we have here is a private eye taking on...Satan. And this isn't a one-off novel, it's the latest in a series featuring p.i. Jack Taylor, who works out of Galway, Ireland. As far as I know the previous Taylor novels have no supernatural content. So, the Devil comes to Galway and begins committing a series of exceedingly nasty and cruel murders. The victims are people Jack knows or has recently met. The Devil's motivation, aside from being, well, fiendish and evil, is that Jack unknowingly interfered with one of his petty schemes in a previous novel. Naturally enough, Jack doesn't believe he's dealing with the Devil off the top, but by the end of the novel he, and we, are convinced that the mysterious and wealthy Kurt is the Prince of Darkness.

Needless to say, the basic concept of The Devil is absolutely bonkers, even laughable. Somehow, though, the ridiculousness of the story didn't bother me that much. The main reason is that Bruen is a spectacularly good writer. His prose is electric with tension and violence, and his humour is very, very dark. I say prose, but at points his style becomes consciously poetic with paragraphs and sentences broken down in to something like stanzas. Bruen, like so many Irish writers past and present, is clearly in love with words, the sound of them, the meaning of them, even the look of them. With writing this good, story and plot almost becomes of secondary interest.

I said almost. There are two ways to look at the Devil's presence in the story. First, he could be a paranoid delusion that exists only in Jack's mind. One character even suggests this, and it does seem possible since Jack exists solely on a diet of Jameson's whiskey, Guinness and Xanax. This doesn't seem likely given that another character, Ridge, independently comes to the conclusion that Kurt is the Devil. The other way to look at this novel is to see the Devil as a symbol of Ireland's moral and financial collapse. This seems like the most plausible explanation. The novel's major theme is Ireland's decline and the horrors of the recent past, from the Troubles to the revelations about abusive priests and nuns. When not trying to figure out if he's dealing with the Devil, Jack is constantly harping about everything in Ireland having turned to "shite." There's really no aspect of modern Ireland Jack doesn't run roughshod over, and he can't forget the crimes of the past. He also seems miffed that so many non-Irish are living and working in Ireland, and it's interesting that Kurt is described by witnesses as speaking with an accent that is, at times, either French or German. Hmm, sounds like Bruen's not a great fan of the EU. Another possible clue that The Devil is intended as a rant about Ireland is that one point Jack mentions that maybe he should just hole up and read his collection of K.C. Constantine novels. Constantine is a mostly obscure American crime writer who, like Bruen, is brilliant at writing dialogue. His detective is Mario Balzic, a small town police chief in Pennsylvania. Balzic appeared in eleven books and one of the later novels was a hardcore rant about the awful state of the USA in the Reagan years. There was no real mystery in that novel (the title escapes me), just the spewing of a lot of pent-up venom. I have a piece on Constantine here. The Devil seems to have been written in a similar vein; it's the eighth Jack Taylor novel and it has very little mystery but a lot of rage that Bruen wants to get out of his system.

As loopy as the Devil's presence is it didn't bother quite as much as the character of Jack Taylor. Jack isn't a poorly written character, but I have a low tolerance for tormented detectives, and Jack has a black belt in self-loathing. Outside of cosy mysteries, it sometimes seems like all detectives are tormented in one way or another; in fact, I think it must be an EU regulation that all Scandinavian fictional detectives must be angst-ridden. In short, the tortured detective is a cliche, and while Jack is certainly entertaining, it bothered me that he was yet another in a long and tedious line of detectives who only find comfort in the bottom of a bottle.

Whether the Devil is real or symbolic or a delusion doesn't change the fact that The Devil is a lot of fun. Fun might not sound like the right word, but Bruen's way with words kept me delighted throughout. And the plot certainly has its fair share of tension and violence. I'm going to try the first Jack Taylor novel and, fingers crossed, it won't involve poltergeists or elementals; best to leave that kind of thing to Mike Carey.
Posted by Cary Watson at 11:47 PM