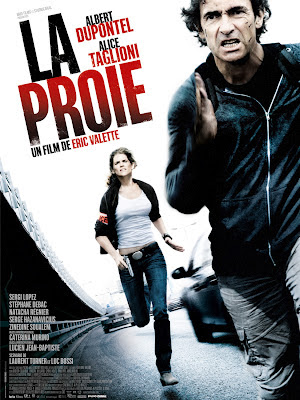 Once again the French are showing the rest of the world how to make a thriller.  In the last year I've seen Point Blank (review here) and Chamber of Death (review here); both were superb French thrillers. The Prey is not quite up to their level, but it's very, very good. What French thrillers lack in budget they more than make up for in plot. Prey artfully combines a prison drama, a man on the run thriller, and a hunt for a serial killer. This layering of plots was done spectacularly in Chamber of Death, and is a hallmark of Sebastien Japrisot, a French mystery/thriller writer whose novels and screenplays always featured ultra-devious plots. It could be that this is simply a characteristic of French culture. Nineteenth-century French novels are often wall-to-wall with schemes and schemers. One I reviewed recently called The Black Sheep by Balzac represented the gold standard in twisty plotting. In fact, the French should have an award for depictions of scheming in the arts and it should be called the Grand Prix de Cesar et Ugolin, in honour of the conniving peasants in Jean de Florette and Manon of the Spring.

But back to the movie. In Prey, the main character is Franck, an imprisoned bank robber. He's only a few months away from getting out and collecting the two million euros he has stashed from his last robbery. The problem is that his criminal partner wants to know where the money is right now. So does Franck's wife, who has their daughter to support and is having trouble making ends meet. Franck also finds himself reluctantly protecting his wimpy cellmate, a man apparently wrongfully accused of attacking a teenage girl. Franck refuses to tell anyone where the money is. He trusts no one, not even his wife. Franck becomes a wanted man in prison and when a opportunity presents itself he escapes. And here's where things get complicated. I won't let slip any spoilers, but let's just say that Franck has to run for his life and freedom while at the same time tracking down a serial killer.

A lot of the pleasure in this film comes from watching how the script manages to juggle different characters and plot elements and have them all come together in the end in a very satisfying way. You have to admire the skill that went into crafting this story. The film doesn't stint on the action, either. There are beaucoup chases, fights and gunplay, and the finale is a literal cliffhanger. The only weaknesses in the film are a couple of so-so performances by actors in secondary roles and some moments in the action sequences that just don't work. Albert Dupontel plays Franck and certainly looks the part of a hard-bitten con. Dupontel was also in A Very Long Engagement, written, of course, by Sebastien Japrisot.

If you're trying to track this film down beware of a similarly-titled French film called Proie. It was complete crap. This one's French title is La Proie, and it's well worth hunting down.
Posted by Cary Watson at 8:47 PM

You are an awesome blogger. This is one of the best blog I had visited so far. Hope to read more post from you in the future. Keep it up. God bless.