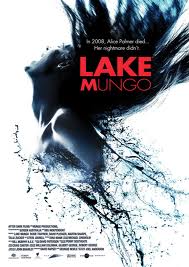 This is repost of a review I wrote about a year ago. I wanted to post it again after seeing and reviewing The Cabin In the Woods, which is a good enough horror film, but it's getting far too much praise, largely, I think, because it's original concept seems all that more imaginative given that horror movies, as a genre, have become extremely stale with most of them reduced to torture porn. Lake Mungo, as far as I can tell, has never received any kind of theatrical release. It's done the round of second-string film festivals and that's it. That's a crime, as I explain in the review below. So if you enjoyed Cabin because it offered a twist on the horror genre, Lake Mungo should knock your socks off, but to see it you'll need to order the DVD from Amazon.

The Australian film Lake Mungo is a faux documentary; let's get that out of the way right off the top. I make a point of mentioning this because if you see this film you will, at several points, have to remind yourself that it is not actually a doc. The director, Joel Anderson, has done an amazing job of creating a film that looks and feels as though it was created by a world-class documentary maker. This is not one of those Blair Witch-type films filmed entirely with shaky-cam shots and grainy video footage. There is some of that in Lake Mungo, but its restrained use makes these scenes all the more effective.

The film is about the Palmer family, who come to believe that they're being haunted by their 16 year-old daughter, Alice, after she drowns in a lake. The family seeks the aid of a psychic and uses video cameras to help determine if they are, in fact, being haunted.

That quick summary makes Lake Mungo sound like just another Paranormal Activity clone, the kind of film in which we wait for the next moment when something jumps out at us and the screaming ensues. Lake Mungo is quite definitely about the supernatural, and there is a ghost, but it is much more than a scarefest. It's one the finest dramas I've seen in quite a few years.

You could say that this film is primarily a study of grief; an incisive, sympathetic, nuts and bolts look at how a family copes with a tragic loss. In fact, the more times you view this film, the more you concentrate on the family drama side of the story and less on the supernatural. Lake Mungo is also about family secrets, about the way otherwise normal, happy families can keep things from one another. One of the biggest shocks in the movie is not caused by a spectral figure, but by a revelation about Alice.

A great deal of the strength of this film comes from its cast, who improvised their dialogue based on plot points they had to hit. If this is what improvisation can achieve, why bother with scriptwriters? Another aspect that merits praise is the look of the film. Anderson and his cinematographer have a knack for choosing just the right angles and lighting tones for their interior shots. Even better is their sensational use of time lapse photography, striking night skies, and electronic sound effects to make the Palmer's house and the surrounding town seem that much eerier.

Is Lake Mungo scary? It's definitely creepy, unsettling, chilling, and there's certainly one jump-in-your-seat moment. Comments about it I've read online, mostly from diehard horror fans, express annoyance that it isn't scary enough. My daughter (a generally sensible third-year law student) found it so frightening she watched (heard) most of the film from behind a pillow, and then spent the next five nights sleeping with the lights on. I think it works brilliantly as both a ghost story and a drama. After seeing it for the first time I left the film feeling terribly sad rather than frightened. I felt as though I'd shared the Palmer's loss, rather than suffered through a haunting.

Lake Mungo is supposed to be remade by an American studio (now that's scary), so order it from Amazon before it turns up in your local cinema starring Lady GaGa and David Hasselhoff. Here's a link to the trailer at YouTube: http://youtu.be/iBhVi-Wbl48
Posted by Cary Watson at 12:08 AM

Email ThisBlogThis!Share to TwitterShare to FacebookShare to Pinterest
Labels: Joel Anderson, Lake Mungo, Paranormal Activity, The Cabin In the Woods