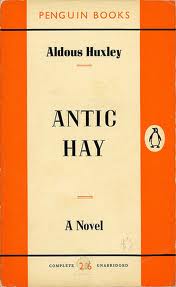 Most people know Aldous Huxley only from having read his Brave New World (1931), probably as part of a course on Utopian literature. It's one of those books that a great many people end up having to read, rather than wanting to read. It's a good novel, but it's not really a fair representation of what Huxley the novelist was all about. Huxley began his career as a satirist, and Antic Hay is a dark and vicious look at the poseurs and pseuds inhabiting London's bohemian world just after WW I. Evelyn Waugh would follow very closely in Huxley's creative footsteps only a few years later and ended up with more popular and enduring success. Both writers took a caustic look at their contemporaries, but Waugh's less abstruse prose style and clear plots have kept him popular with readers and BBC film producers.

Antic Hay follows a half-dozen or so characters who form a kind of sampler pack of bohemians; there's Mercaptan the effete, womanizing writer of irrelevant scholarly articles; Lypiatt the blustering, self-important artist; Coleman the bombastic hedonist; and Theodore Gumbril, the main character, a dissatisfied intellectual who quits his teaching job to pursue a fatuous scheme to invent and sell trousers containing an inflatable seat for added comfort. The women in the group include Myra, a dark muse to two of the male characters, and Rosie, a bored housewife.

The plot is a kind of dance in which various characters pair off for an hour, an evening or a day to expound their beliefs, strike intellectual poses or seduce each other. More often than not they come across as monstrously affected, self-absorbed and pretentious. Although Huxley's intention is satirical (characters are given ludicrous names like Bruin Opps), the novel has a dark edge that makes it more than just a benign jab at some ridiculous personalities. Myra appears to be a casually cruel, cold-hearted beauty, but Huxley shows that she's been terribly damaged, like so many others, by the death of a loved one in the war. Similarly, Lypiatt initially comes across as a buffoon, but at the end of the novel he comes to a devastating realization that his artistic life has been a failure and a farce. The last we see of him he's probably on the verge of blowing his brains out.

Something that all the characters share is a realization that the world has changed profoundly and that there are no certainties or truths to anchor themselves to anymore. The nineteenth century ended with WW I, and the years following the war saw a sea change in the arts, fashion, politics and music. Huxley's characters are lost in this new world and their eccentric behaviour can be seen as a way of dealing with the stress of these changes. Huxley's writing also reflects the changes going on at the time. On the one hand he flaunts his classical education with references and quotes from Greek and Latin (not to mention his characters occasionally using those languages as well as French and Italian), but on the other hand he abandons a traditional plot structure in favour of something more freewheeling and unpredicatable. Huxley is clearly aware that thanks to Marcel Proust and James Joyce the idea of what a novel should be has been utterly transformed. Huxley produced an even more non-traditional novel, Eyeless In Gaza, in 1936.

Antic Hay is a mostly amusing novel, although at times Huxley's erudite style can be grating, and the changes in tone from comic to serious to philosophical aren't always managed well. The strength of the novel lies in Huxley's ability to tease out the fear and uncertainty at the heart of his main characters. The spirit of the novel is captured best in this passage:

"And besides, when the future and the past are abolished, when it is only the present instant, whether enchanted or unenchanted, that counts, when there are no causes or motives, no future consequences to be considered, how can there be responsibility, even for those who are not clowns?"