Book Review: Chavs: The Demonization of the Working Class (2011) by Owen Jones 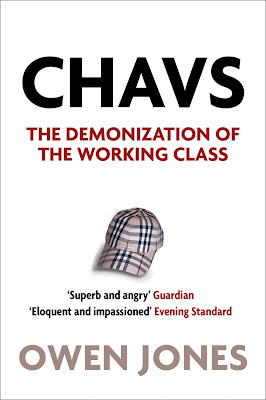 For those of us who don't live in the UK, "chav" is a slang term for white working-class men and women. More specifically, chav is meant to describe someone as a drunken, drugged, lazy, stupid, bling-obsessed, promiscuous member of the white working-class. Chav comes from the Romany word chavi, which means child. In the UK, the use of chav started in about 2005. For Owen Jones, the birth and use of this term is symbolic of the way the middle and upper classes have managed to marginalize and emasculate the working-class. "Chav" also represents the triumph of the Reagan/Thatcher model of governance: enrich the rich and impoverish the poor. Chavs are a figure of fun and fear in the UK. Little Britain's Vicky Pollard character is a comic chav, while the tabloid press and right-wing establishment papers like the Daily Telegraph foster a myth of unruly chavs terrorizing law-abiding Britons. Oh, and chavs also like to sponge off the state.

A large part of Jones' book deals with the various legal and political steps that the British government has taken in the last thirty or so years to create a society that is all about financial gain rather than social welfare and harmony. If you've been reading any kind of left-wing reporting in the last ten years none of this will be news. It's a depressing fact of life that the war on the working class has been pursued with equal vigour in the US and here in Canada. The war in Britain differs only in the details. That said, Jones does a superb job of breaking down the ideology and tactics of the ruling classes that have led to Britain becoming one of the epicentres of cutthroat capitalism.

What's of particular interest in Chavs is that the Brits, always quick to come up new and vigorous slang terms, have devised a way to legitimize bigotry against the unemployed and the working poor. If there's an equivalent to chav in North America it's "white trash", a term that was originally used to describe poor whites in the Deep South. Until Jones' book came along it's probable that no one in Britain viewed "chav" as a derogatory term in the same class as kike, spic or wog, but his analysis of its use in popular culture and the media makes it clear that the term is applied with the same sense of fear and loathing as the more familiar ethnic and racial epithets.

Here on the other side of the Atlantic there is really no direct equivalent to chav, although that doesn't mean one won't be invented soon. One reason for this is that in the US the economic underclass is overwhelmingly black, and any chav-like word would be regarded as blatantly racist. Just because chav doesn't currently exist in North America it doesn't mean there isn't hatred and contempt directed towards the lower class, but the fear of being called a racist acts as a damper on the mainstream right-wing media.

Because the right-wing can't directly attack the lower class they tend to focus their ire on the those who represent or argue in favour of the working class. This is particularly evident in the US. Union leaders, social activists, and left-wing media personalities (the few that exist) are vilified with unbeleivable ferocity, usually by Fox News. Two examples spring to mind. This first is Michael Moore. You can criticize his methodology and his selective use of facts, but what can't be denied is that the level of vitriol directed towards him is mostly about the fact that he dares to challenge the capitalist status quo in the US. In the US it's increasingly the case that any challenge to capitalism or the American way of life is regarded as disloyal, unAmerican, treasonous, and even psychotic. In fact, this response even has a name, and it's called eliminationist rhetoric. In a nutshell, right-wing eliminationist rhetoric argues for the removal from public life of anyone who opposes American capitalism or so-called American "values." At times this rhetoric bears an uncanny similarity to the kind of anti-semitic language floating around Germany in the 1920s and 30s.

The other major example is the right-wing response to President Obama's healthcare plan. This was a public policy directly intended (in a half-assed sort of way) to help the lower middle-class and working class. The reaction to it was extraordinary. Right-wing voices, from the more or less respectable to populist blowhards to the outright loony, all sang from the same hymn book: Obamacare meant the destruction of the US. Obama was called a Nazi, and the level of public discourse went downhill from there. This is probably the purest example of hatred towards the working-class being redirected at those who strive to act on their behalf.

This is one of the very best books of social and political analysis I've read in the last few years. Jones does a great job of balancing the anecdotal with the analytical, and he's not afraid to take fellow leftists to task for buying into the chav caricature. For North American readers the book should be read simply for the warning it contains that once the ruling class manages to stigmatize an entire social group, the path is open to inflict any kind of pain on them. After all, they're only chavs.

If you're interested, my piece on the psychological basis of conservatism is here, and a related post on the lack of social welfare spending as a cause of American religiosity is here.
Posted by Cary Watson at 8:33 PM

Thanks, Anon. Your succinct yet penetrating commentary has been a real revelation to me. I've done a complete 180 on this whole welfare state business! FYI: "you're" and "don't" need apostrophes.