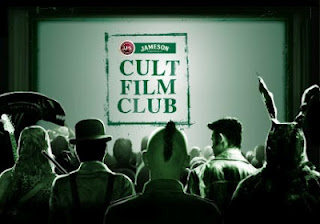 Everyone's trying to find the next cult film. It's one way to make a rep for yourself as a critic or blogger if you can convince the film geekiverse that there's this film out there that no one's seen, it's low budget, it's weird, it breaks the conventions of the genre, and it's got a great performance by someone you've never heard of but who will, after this film becomes better known, be the next big thing in Hollywood. It's a bit like astronomers trying to find a new space object so they can name it after themselves. Sometimes, however, the mad rush to find the next cult film results in some films acquiring an undeserved reputation, and here they are:

David Lynch's first film is evicted from cultdom because it was marketed as a cult film before it was ever released. I was in film school at the time and we were seeing pins and posters promoting it months before it came to town. The film itself? An overheated compilation of shots and scenes that try way too hard to be weird. A cult film can't be this self-conscious about its eccentricities.

This film gets a failing grade for being a tease. It promises sexual depravity, it sings and dances about it for God's sake, but does it deliver? No. Everyone keeps most of their clothes on and I'm not sure if anyone so much as kisses. This has to be most chaste film about sex ever. Oh, and it's only got one really good song.

3. Anything by Russ Meyer

For proof that film geeks are 16-year-old boys at heart, if not in fact, look no further than how often works by Meyer turn up on cult film lists. This man's only real talent was combing the world to find mega-breasted women, which was, admittedly, a daunting task in the Paleozoic era before implants. His films are noisy, less subtle than a stubbed toe, as funny as a Bazooka Joe comic, but he does deliver enough T & A to warm the heart (to name one organ) of any teenage boy.

It's no surprise the remake with Nicholas Cage was a dud: the original was equally bad.  Christopher Lee and Edward Woodward provide some good acting, but that only papers over a weak and predictable plot. Unless you're on heavy medication every twist in the story can be seen a mile off, which makes Woodward's character's final immolation a bit of a yawn. Before that happens we get a lot of tedious chatter about paganism vs Christianity and a healthy dose of female nudity, which, as outlined above, may account for its cult status.

Once car chases became de rigueur for 1970s action movies, the B-movie industry started making films all about car chases. This one is the lamest of the bunch. The "chases" consist of a lot of pointless tire squealing and driving real fast in a straight line. The worst part is Susan George's acting. She attempts an American accent and ends up sounding like a recovering stroke victim.

The concept was great, but the execution was weak. This sounds like it should be a kick-ass action movie, but in fact it's almost action-free. There's a lot of running around and Kurt Russell growling out his lines, but if you're looking for gunplay and violence you'll have to look elsewhere. Truth be told, John Carpenter, the director, only has The Thing on the plus side of his ledger. Escape represents his normal level of mediocrity.

Plan 9 is supposed to be one of those films that's so bad it jumps through a cinematic stargate and becomes a comedy. It is awful, but it's an awfulness that's more dull than droll. For a crappy film that is solidly funny from beginning to end check out The Creeping Terror or The Beast of  Yucca Flats.

Unlike Escape From New York, Scarface does not stint on the action. Unfortunately, the action is directed with more predictability and less flair than the average WWE Smackdown. Brian De Palma couldn''t direct an action sequence if his life depended on it.  He can create homages to Hitchcock until the cows come home, but don't give him men with guns and expect him to film anything dynamic.

This film earned its cult status because it has an old woman acting young and crazy and having sex with a young man. That's it; that's all there is to it. If the idea of a retiree not acting her age blows your mind then this film is for you. For the rest of us it wears out its welcome before the first act is over. A sidebar: the film combines eccentric characters with an upper-crust, East Coast milieu, and it's a formula Wes Anderson decided to borrow for The Royal Tenenbaums.

This is a case of all hat, no cattle. It's got a gritty, grimy, neon-lit look, but, well, nothing really happens. The title gang has to get from one side of New York to the other while avoiding rival gangs. This is done without a lot of action, and the Warriors turn to be one of those platoons from World War Two movies: a representative from every ethnic group. The only thing missing is one of them playing the harmonica. The Wanderers, directed by Philip Kaufman, was another youth gang film released the same year and it's far more deserving of cult status.
Posted by Cary Watson at 10:08 PM

Solid list. I probably don't disagree with any of your picks except for the Wicker Man, which I think is a terrific film.
Andrew

I think by the time I saw it had been so hyped I was expecting something grander.

I googled "cocoon is an overrated movie" and i stumbled upon this, lol. Anyways, why not include that movie aswell? Is overrated as hell!