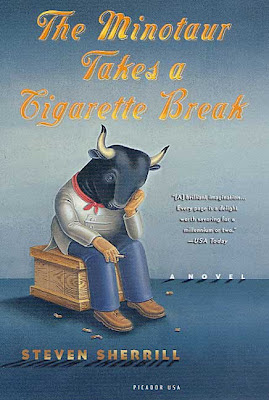 Even though this novel does have the Minotaur of Greek myth as its main character, this is not a fantasy novel. Nothing fantastical or magical occurs, there are no prophecies fulfilled, no rousing Clash of the Titans battles, and no one wears a toga. If anything, this is closer to being a hyper-realist story than it is an exercise in fantasy. The setting is rural North Carolina in the here and now. The Minotaur, complete with his massive bull head, has found work as a line cook in a semi-fancy steakhouse. Most everyone at the steakhouse accepts or ignores their bull-headed co-worker, and the Minotaur seems to like it that way. Not a lot happens in this novel, but its pleasures aren't plot-based.

This novel is primarily about the mindset of the outsider, the loner. You can view the Minotaur as an immigrant or simply someone who's socially awkward, but either way Sherrill does a superb job of showing the quiet pains and pleasures of a life lived outside of mainstream society. The Minotaur experiences loneliness but he also seems to take some comfort in being detached from the hurly-burly of relationships.

The most remarkable thing about this novel is author's ability to write about manual labour in an interesting, almost loving way. Sherrill shows that work, even the most routine or meaningless variety, is a kind of social and psychological glue that helps keeps us sane. One of the particular pleasures of Minotaur is the way it captures the feel, the nuances, and the small joys of working with your hands. The kind of job that earns minimum wage is rarely featured in contemporary fiction, and if it is the people doing it are usually presented as villains, oppressed proles, or slack-jawed cretins. Sherrill shows that something as mundane as repairing a car or prepping food can become, when done capably and honestly, poetry.

As I said earlier, this isn't a fantasy novel. Yes, a couple of figures from Greek mythology make cameo appearances, but they, like the Minotaur, have had their godly pride and power swallowed up by America. And that, perhaps, is another theme in the novel: America as a labyrinth that confuses and consumes the weak or unwary. Needless to say, this is a fairly unique novel. The prose style is an intriguing mix of the matter-of-fact and the poetic, and in overall terms Sherrill reminds me, in a roundabout way, of Charles Portis or Kurt Vonnegut, two writers who, like Sherrill, tell tall tales in the plainest possible way. I'll certainly be looking for Sherill's two other novels, and if I lived near him and needed some home repairs I'd definitely call him first because I'm pretty certain he must be a hell of a handyman.