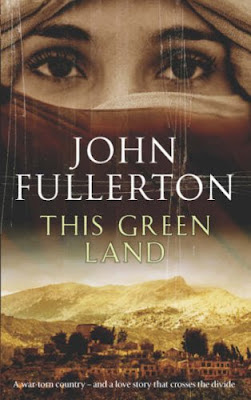 Why the hell haven't I heard about John Fullerton before? The only reason I came across this Beirut-set thriller is that I was in process of discarding a bunch of old paperbacks from the bookmobile and this one stuck out from the usual bulk load of James Pattersons and Danielle Steels. Fullerton is an excellent writer, deftly combining scenes of violence with evocative descriptions of the beauty and terror of Lebanon. It's not an exaggeration to say that with this novel Fullerton puts himself on the same level with Eric Ambler, and, dare I say it, a notch above John Le Carre. So why isn't he more well known? That's easy. You don't get ahead in the thriller business if you slag Israel and the U.S. And you can completely forget about selling the film rights if your heroine is a communist suicide bomber.

The story is set in Beirut in 1985 as the city, and Lebanon, is being hung, drawn and quartered by Israel, Syria, the PLO, the Phalangists, and an alphabet soup of political and ethnic militias. Nicholas Lorimer, a young Brit working for the UN, arrives in Beirut to take up his first posting. He's already been targeted by Ustaz, the leader of a shadowy communist organization working to kill El-Hami, the leader of a Christian militia. El-Hami is poised to become the next leader of Lebanon and once he's in power things are likely to get even worse for the country. Reem is a young Christian woman groomed and trained by Ustaz to assassinate El-Hami in a suicide attack. Part of her mission is to start a relationship with Lorimer. Because Lorimer is with the UN he has easy access to all parts of Lebanon, and Reem can therefore tag along with him and scope out the security around El-Hami.

The inevitable happens and Reem and Lorimer really do fall in love, and what began as a thriller also becomes a very tense romance. The tension comes from the question of whether Reem will let her heart win out over her political convictions. This Green Land succeeds as a thriller because Reem and Nicholas are effective, believable characters who have an unlikely but plausible love affair. As the novel moves to its climax we're desperately hoping that both of them will survive.

What sets this thriller apart from others in the field (and probably doomed its commercial success) is its pointed and effective criticisms of Israel and the U.S. Fullerton doesn't go out of his way to grind a political axe, but he makes it clear that those two allies were behind a lot of the overt and covert carnage in Lebanon. Mainstream thrillers don't dare say things like this. Fullerton was the Reuters bureau chief during Lebanon's civil war and so I think it's safe to say he knows whereof he speaks. In relation to this, it's hard to imagine a better evocation of a city at war. Fullerton peppers his novel with flashes of violence that feel like first-hand accounts. At any moment of the day or night an artillery barrage, a mortar strike, a car bomb or a shootout can kill one or one hundred people.

If there's a weakness here it lies in keeping track of who's doing what to whom. That's probably how it actually felt in Beirut in 1985, but at times I had trouble figuring out who Reem was working for. Lebanon's civil war was a tangled and bloody affair, and Fullerton lets us see the blood but doesn't do much to make the political superstructure to the war more understandable. That, however, is a minor flaw. Judged solely as a thriller this is a top-notch page-turner, as they say, and when I say it bears comparison to Eric Ambler it's because, beyond being well-written, Fullerton borrows Ambler's technique of using a naif as his protagonist. Ambler's male protagonists were almost always innocent Englishmen caught up in foreign intrigues that exposed their political innocence. Ambler used this narrative device brilliantly and Fullerton is his equal with This Green Land. Keep in mind that the hardcover version apparently goes under the title of Give Me Death.