The expression old wine in new bottles pretty much sums up Attack the Block. The old wine is an invasion of bad-tempered aliens into a small, isolated, tight-knit community. The community's most fearless members must band together to resist and defeat the toothy visitors from space. In a nutshell, this is the plot of many alien incursion/mutant critter films from the 1950s. The new bottle is that the community is a slummy South London apartment block instead of a town in the American southwest, and the fearless locals are a feral gang of teenage muggers. There's even a stoner who doubles for the all-knowing scientist figure found in the '50s versions of Attack. The stoner's gained his knowledge from an addiction to the Discovery Channel. 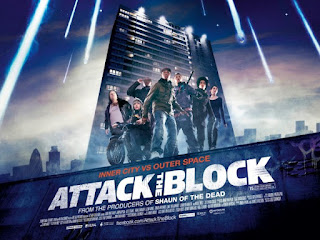 The film begins on Guy Fawkes night with fireworks going off in every direction. Some of the fireworks come down from space and they contain creatures that resemble eyeless, extra-furry, extra-large chimps with glow-in-the-dark teeth. The illuminated teeth are a very nice touch. The first critter to hit the ground is savagely dispatched by Moses, the leader of a small gang of boys who are barely into their teens. The gang has just finished mugging a young nurse. It turns out the first alien was a female in heat, and her scent has attached itself to the gang, who find themselves besieged in their apartment block (the Wyndham Tower; a knowing nod to the very British alien invasion novels by John Wyndham) by a few dozen irate space chimps. Some of the gang live, some die, and the aliens get a proper kicking.

Attack is consistently entertaining simply as an Us vs. Them sci-fi thriller. The pace is good, there are some good gags, and the aliens are a pleasant change from the usual scaly, slimy visitors from space we see in this kind of movie. It's a pity, though, that Joe Cornish, doubling as director and scirptwriter, succumbs to the usual white middle-class (in Joe's case upper class) guilt when it comes to the gang. When we first meet them they seem like every urbanite's nightmare: armed, hoody-wearing visible minorities intent on relieving white people of mobile phones and cash. And, initially, that's exactly what they are. Cornish quickly shows us that underneath the cursing, thievery and threats of violence they're mostly sweet kiddos who just happen to be a bit rough around the edges. And when called upon they're brave, resourceful, and self-sacrificing. It's a pleasing myth for audiences to believe that bad guys, once you get to know them, are actually a thoroughly decent bunch of chaps. It might have been more interesting if the gang's utter ruthlessness and taste for violence was what won the day, not their innate nobleness. Imagine if the aliens had landed and encountered Alex and his droogs? Now there's a sequel I'd like to see.

Attack had a Dr Who vibe that I found enjoyable; it doesn't take itself at all seriously and it's as eager to please as a puppy. The one major flaw is the acting. The actors playing the gang members are decidedly mediocre. What's worse is that John Boyega, who plays Moses and is the hero of the story, is the poorest of the bunch. Chuck Norris has more dramatic range than Boyega. The film's energy and tension suffers noticeably due to the am-dram acting.
Posted by Cary Watson at 9:25 PM