Book Review: Not the End of the World (2004) by Geraldine McCaughrean 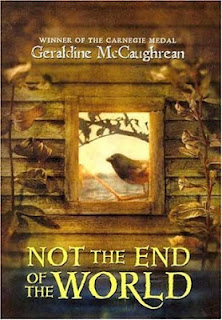 So, if you were interested in taking a poke at theism and religiosity how would you do it? Most writers would choose an essay, but not many would choose a young adult novel to do the job. That's what Geraldine McCaughrean has done in Not the End of the World, a retelling of the Old Testament story of Noah and the Flood. McCaughrean makes the brilliant decision to look at this myth through the prism of realism (it's caused by a natural catastrophe), to imagine that it really happened and that life on board the ark followed the laws of nature and basic human psychology.  She asks the questions: what kind of man would build an ark and gather together all kinds of animals? What would life be like on board such a ship? How would Noah's family react to his belief and their predicament? The answers are, in order, a religious nutjob, hideous, and with mounting terror and fear.

McCaughrean presents Noah as a delusional mystic; the kind of man who's continually at odds with his peers because of his zealotry, and a man who bullies his family into following his mad dream of building an ark. Once the waters rise, life on the ark becomes virtually unbearable. The multitude of animals create an epic amount of pungent filth; food supplies for the humans are meagre and nasty; and the various critters are either eating each other or multiplying to plague-like numbers. Noah's extended family have a range of reactions to their circumstances. Some simply retreat into a shell, saying and doing nothing and just hoping that this trip from hell will come to an end. Shem, Noah's oldest son, begins to go insane, becoming filled with even more religious fervour than Noah, if that's possible. Towards the end of the voyage Shem actually becomes murderous. The youngest members of the family, Timna and her brother Japheth, are the most humane and the most questioning on the ark. They give shelter to a trio of stowaways rescued from the flood, and the novel becomes a kind of thriller as the two try and keep the stowaways from being discovered. It's certain that Noah and Shem will kill them.

What McCaughrean manages to do with her novel is show that any kind of religious belief, if taken to its logical extreme (and nothing's more extreme than building an ark), must rest on a bedrock of superstition, unthinking devotion to ritual, fear of authority, and a wilful disregard for logical thinking. It would be easy for an author to attempt this and come across as preachy or condescending or both, but McCaughrean does neither. She lets reality and logic speak for themselves by crafting what amounts to a novel version of a disaster movie. She takes a disparate group of characters, throws them into a hellish situation, adds some religion to the mix, and records what happens. The story is tense, exciting, horrifying, but at the same time McCaughrean keeps the plot lean, and proves, yet again, that's she's one of the best prose stylists operating in any genre.

This book came out in 2004, and it's pleasing to think that perhaps it was McCaughrean's reaction to the rising tide of religious intolerance and zealotry at loose in the world at that time. Bush and Blair, both loud and proud Christians, were busily violating the sixth commandment in Iraq and elsewhere, and across the Muslim world Koranic excuses were found for acts of terrorism, ethnic cleansing, and vicious attacks on women under the banner of sharia law. It's interesting that a Google search for U.S. newspaper reviews of this book turned up nothing. It's probably a measure of just how effective her novel is that it has received so little notice in god-fearing America. Anti-religious content aside, Not the End of the World succeeds marvellously as a thriller and a character study, and don't let the young adult classification hold you back from reading it. This novel, like McCaughrean's The Death Defying Pepper Roux (my review here), stands comparison with anything being written for the adult market.
Posted by Cary Watson at 6:01 PM

Email ThisBlogThis!Share to TwitterShare to FacebookShare to Pinterest
Labels: Geraldine McCaughrean, Noah, Not the End of the World, Old Testament, The Death Defying Pepper Roux, the Flood