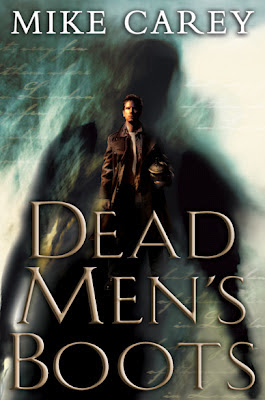 This is the third of Mike Carey's supernatural mystery/thrillers featuring Felix Castor, exorcist and literary son of Philip Marlowe. A lot of fictional detectives, supernatural or regular flavour, share some or all of Marlowe's DNA, but Carey pretty much goes the full monty. That's not a mark against Carey since he's an excellent writer and his sleuth is as lively and entertaining as the original. I only mention it because this time around Carey has written a mystery that relies less on the supernatural. Not a lot less, but in comparison with the previous Castor books (reviews here and here) this one is halfway to being a straight mystery.

In this adventure Castor is asked to prove the innocence of a man convicted of murder. The evidence against him is overwhelming to the point of redundancy, but some elements of the crime also point to the involvement of an American serial killer. The only problem is that the American has been dead for quite a while. While investigating this case Felix is also looking into the death of a fellow exorcist whose spirit has evidently turned into a poltergeist.

Carey has many strengths as a writer: he can spin out dense, twisty plots with ease; his dialogue is sharp; and his descriptions of the supernatural are always inventive and powerful. This novel, like the previous two, could easily be a bit shorter, but a greater problem that rises up in this novel is the use of two recurring characters who act as deus ex machinas. Nicky Heath is a zombie and computer genius, and Felix turns to him whenever he needs background info. Juliet is a succubus (a kind of demon) who has temporarily retired from her evil ways, but she's still a very powerful creature who more than evens the odds in a fight with the real or the unreal. Both are interesting characters, but in this novel Carey (and Felix) start to rely on them too much. It's really a case of lazy writing. Whenever Carey needs Felix to learn some facts and figures, Nicky pops up to hammer a keyboard and come up with the goods. And when Felix needs some muscle, supernatural or otherwise, Juliet is conveniently there to break heads. Of the two, Nicky is the most annoying. The computer geek who has all the answers has now become a stock character in film and literature. Whenever a hero or heroine needs to access a database of some kind the geek is there to effortlessly provide all the answers with a minimum of fuss and a maximum of attitude. This kind of character is roughly equivalent to the "stoolie" or "snitch" or "grass" of previous years. Their main purpose is to spare the lead character (and the author) the drudgery of going through files and so on.

Dead Men's Boots is quite entertaining, but I'm a little worried that Carey might not be keeping his eye on the ball. The diminished supernatural elements in this novel are a tad disappointing, and Nicky's role as the all-knowing computer genie needs to be reduced. Similarly, Juliet becomes less interesting the more she's simply used to fulfill the role of the cavalry coming to the rescue.
Posted by Cary Watson at 8:04 PM