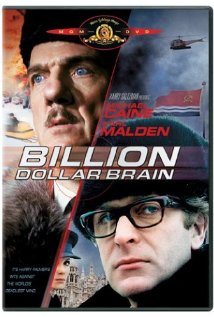 In the 1960s it was all about the spies: spies on TV, spies at the movies, and spy novels by the bushel. Harry Saltzman, not content with co-producing the James Bond films, bought the rights to Len Deighton's spy novels and made three of them featuring Michael Caine as British agent Harry Palmer. The Palmer character was intended to be the anti-Bond: a spy who was more civil servant than superhero, and whose adventures reflected Cold War realities. The first two films, The Ipcress File and Funeral In Berlin, followed this formula faithfully. The third film, Billion Dollar Brain, went in an altogether different direction. For one thing Ken Russell was hired as the director. Russell had a formidable reputation based on his work at the BBC, but Brain was his first feature. It's clear he wanted to make a big impression.

Billion Dollar Brain sits halfway between being a James Bond spectacular and a gritty, realistic spy story. That's probably the main reason it did poorly at the box office and with the critics. What everyone seems to have missed is that it's a brilliant piece of filmmaking. The fact that it didn't fulfill contemporary genre expectations is beside the point. Brain is simply a celebration of filmmaking magic. The visual exuberance and flair in this film is off the charts. Russell's shot compositon, camera movements, and use of locations is superb. The story is set in Finland in the depths of winter and I can't think of another film that's made winter look so glamorous, so cold and so beautiful. The visuals are matched by the score, which is courtesy of Richard Rodney Bennett. The music manages to suggest icy cold, romance and tension, and it does it in a lush, romantic style that includes the prominent use of a theremin; probably the first time a theremin was used outside of a horror or sci-fi film. All in all, this is one of the best film scores ever.

The plot conerns a deranged Texas billionaire, the wonderfully named General Midwinter, who's bankrolling an anti-Soviet uprising in Latvia. At the heart of his plan is a giant computer designed to co-ordiante the uprising. Karl Malden is Midwinter's point man in Finland, but he's actually skimming every dime Midwinter thinks is going to Latvia. Harry Palmer has to ensure that Midwinter's schemes don't lead to World War III. The story is not meant to be taken seriously. This is first and foremost a satirical look at Cold War fear and paranoia, particularly the kind that was coming out of the US. General Midwinter is a mad character who would be equally at home in Dr. Strangelove. His ranch is the scene of anti-communist rallies that have a certain pre-war German flavour, and his monogram, emblazoned on the side of his oil tankers, is also ominously familiar. Ed Begley gives a great, outsized performance as Midwinter, and the script gives him a score of juicy lines, my favourite being, "My arm is long and my vengeance is total!" The faint whiff of anti-Americanism may well have hurt Brain with US critics. What might have hurt it even more was it's sympathetic portrayal of the Soviets, led by Oscar Homolka as Colonel Stok. In one key scene Stok leaves a performance of The Leningrad Symphony by Shostakovich to meet Palmer. The symphony, which is a tribute to the defenders of Leningrad, has left Stok in tears, and he explains its meaning to a sympathetic Palmer. That's not the kind of conversation Bond ever had with anyone from Smersh.

This is one of those films that has a score of memorable set pieces and scenes, too many to mention, really, but some of the highlights include Palmer being chased through a snowy woods by mounted troops; a primitive wooden ferris wheel turning by the side of a frozen lake; blackmarketeers ambushing a truck; and, most memorably, the demise of Midwinter, which is a direct and clever homage to Sergei Eisenstein's Alexander Nevsky. If nothing else, Billion Dollar Brain is the best-looking spy film I can think of, and its sly humour is probably more appreciated today than in 1967. The clip below has the film's opening credits (by the great Maurice Binder) with Bennett's amazing score.

If you want to find out a little more behind the film, see further images and some interesting marketing ephemera, I'd encourage you to visit the Deighton Dossier website.

Rob,
Thanks, I will.