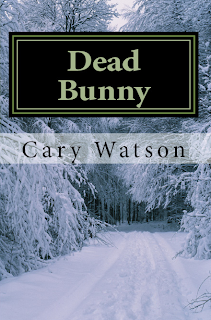 Well, I've actually done it. I've written a mystery novel. I actually wrote it about ten years ago in a I-reckon-I can-write-something-just-as-good-as-this moment after reading one mediocre mystery novel too many. That was one reason for writing Dead Bunny, the other being that I was interested in going through the challenge of writing a novel. I'd written scripts of various lengths, two of which were actually filmed, but I'd never attempted anything as ambitious as a novel. I wrote it over a period of about four months while I was managing the clothing store my wife and I owned. Business may have suffered as I became a bit Basil Fawlty-ish if anyone dared to interrupt me as I scribbled away while at the sales desk. We closed the business a long time ago. I blame the economy. Anyway, I finished Dead Bunny and then let it sit for a while. I sent it to one Toronto publishing house, and after six months I got a "thanks but no thank"s reply. So early this year I took another look at the manuscript, gave it a thorough revison, and decided to go the self-publishing route. Why self-publishing? Impatience. I just don't feel like sending out my manuscript and then waiting months and months for a reply, and then having to go through the process all over again if I get a rejection slip. I'm hoping my self-published book might attract some sales, a kindly review, and then maybe a publisher for my next book. It could happen. Really.

The most interesting thing about the writing process was learning that hammering out 90k words was the easy part. I'd initially thought that writing something novel length would be tortuous, but once I got going the pages added up pretty quickly. The hard part was trying to say things in an original way. Every sentence, every line of dialogue offers a temptation to resort to cliche, commonplace phrases, and boilerplate metaphors and similies. That was the hard part. Almost as difficult was keeping on top of the plot. Once I started writing the story, which was mapped out pretty neatly in my head at the beginning, it took on a life of its own. That was annoying. It's hard to describe, but it was as though the story was always one jump ahead of me and I was playing catch up.

And now to the novel. It's about the disappearance of the daughter of a woman who's just won big in the lottery. My detective, Quentin Winchester, is actually a secondhand goods dealer who gets roped into looking for the woman by his brother Ron, a lawyer. I've tried to write a mystery that's amusing, puzzling, and also gives readers a sense of what life in Toronto is like. Many years ago I worked for the Canadian Broadcasting Corporation reading scripts and novels for their Movies and Mini-Series department. It always annoyed me that the Toronto presented in so many crime novels was either impossibly hardboiled or ridiculously twee. I hope my novel shows Toronto to be neither. Anyway, it's available now for the low price of only $18 by clicking here, or by clicking on the cover thumbnail on the top right. It will also be available through Amazon.com about a week after the date of this post. Buy one. Buy several. You can use it to hold open windows, as a mouse pad, and as a decorative and literary drinks coaster. If you do buy and read it, please let me know what you think, even if, gulp, you dislike it.
Posted by Cary Watson at 11:39 PM

Good luck with it Cary