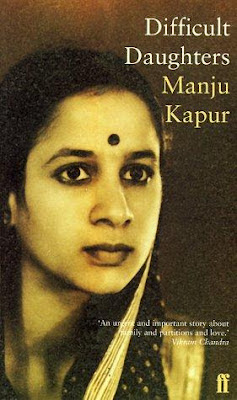 Just this week an international poll taken by the Thomson Reuters Foundation found that India is the least woman-friendly country amongst the G20 countries. Women in India are still subject to domestic slavery, child marriage, and violence and murder as result of dowry disputes. Difficult Daughters shows that the more things don't change, the more they stay intolerable. Difficult Daughters is set in the years leading up to India's Independence and Partition. The central character is Virmati, the eldest daughter of a prosperous family of jewellers. As she comes of age in the early 1940s the political changes sweeping India have also produced a shift in attitudes towards women. A small, but significant, minority of women are choosing to continue their education past the most basic level, right up to university. Virmati is one of those girls.

Difficult Daughters is a hindsight novel. The purpose of hindsight novels is to take us back in time to show us that things were once a whole lot worse, or, in rarer cases, a whole lot better. In this case, author Kupar is looking back and letting us know that Indian women, even the ones from the middle-classes, had it very bad. The hindsight aspect of the novel isn't its strongest feature. It's hardly news to us, or Indian readers, that women faced a laundry list of restrictions, prejudices and barriers once upon a time. The more time Kapur spends detailing the sexism of 1940s India, the more the story drags.

Fortunately, Kapur does a much better job of describing the relationship between Virmati and Harish, a college professor. When Virmati goes to college in Lahore she comes under the spell of the married professor. He pursues her despite the fact that he's married and they eventually become lovers. This affair, and Virmati's quest for educational success, drives her away from her traditional family until, eventually, she's ostracized by them. Harish finally marries Virmati and makes her a co-wife, something that was allowed, but frowned upon, in Hindu society. Life in a two-wife household is hell for Virmati. It's this aspect of the novel that Kapur excels at; her descriptions of the tension in the household, and the weasel-ish hypocrisy of Harish are excellent. As a psycholgical novel, as a character study, Difficult Daughters is very good.

Another novel with very similar themes, but with more ambition and more elegant prose, is The Sweet and Simple Kind (my review here) by Yasmine Gooneratne. It's set in Sri Lanka in the 1950s and is well worth seeking out. And for an excellent novel about Partition read my review of Partitions by Amit Majmudar.
Posted by Cary Watson at 6:15 PM