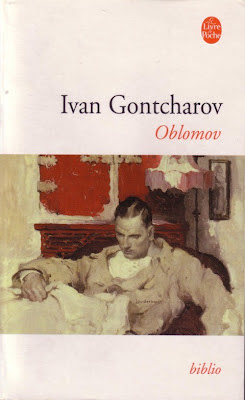 Nobody does psychological insight like nineteenth-century Russian novelists. Tolstoy, Dostoevsky, Gogol, Chekhov and Turgenev liked to take characters and pass them under an electron microscope of analysis and evaluation. Not for them the flash and dash plotting of Zola or Balzac; the Russians settle down with one or two characters and peel away their layers as if they were onions. One of the best, if lesser known, examples of this is Oblomov. The main reason for its relative anonymity is, I'm guessing, that Ilya Oblomov, the character under dissection in Oblomov, is not, at first glance, wrestling with the big existential questions writers like Dostoevsky and Tolstoy liked to challenge their characters with. Oblomov is simply lazy.

Oblomov is in his early thirties and owns an estate with 350 serfs. He hasn't been to his estate in many years, and instead lives in St. Petersburg off the income he derives from the work of the serfs. By any measure Oblomov's a parasite. What's worse, especially for him, is that he's indecisive, a prevaricator, bone idle, racked by uncertainty, hesitant, lethargic, irresolute, and unmotivated. In short, he's a bundle of passively negative qualities. In the brilliant opening section of the novel, set over the course of a typically uneventful day in Oblomov's life, we see him demonstrate every one of his negative qualities. Oblomov basically wants to live in a kind of endless daydream of quiet comforts, good food and discreet pleasures, and to that end he avoids any actions or decisions that threaten to break the bovine trajectory of his life. Even Oblomov's serf/manservant, Zakhar, is profoundly lazy.

Oblomov's best and only friend is Stolz, who decides to rouse his friend out of his waking slumber by putting him in the orbit of Olga, a bright young woman who sees that underneath the inertia Oblomov is a kindly, good-hearted creature. Slowly, Oblomov comes out of his shell and falls in love with Olga and she with him. It looks like Oblomov is going to turn the corner and become a functioning member of society and a husband, but his indecisiveness and fear of taking action takes hold once again and he begins a long, slow decline into a near-vegetative state and an early death. Along the way he ends up in the clutches of embezzlers, marries his lower-class landlady, and finishes his days in a ramshackle house in the suburbs. Olga ends up marrying Stolz.

The power and charm of Oblomov comes from the fact that the title character lies inside each and every one of us. Everybody has an inner Oblomov dying to lie down, have a bit of a nap, mull things over, put off making a decision, have one more cookie, think about getting started on a project, and, well, you get the picture. Few of us wrestle with the demons Dostoevsky throws at his characters, but most everyone fights against Oblomovitis (as it's termed in the book) on a daily basis. I've read Oblomov three times over the years and one of the reasons I do so is because it's more motivational than a gross of Tony Robbins CDs.

Oblomov isn't just about a ridiculously lazy man. Goncharov makes it clear that Oblomov is a by-product of serfdom. He and his immediate ancestors have been made rich, fat and useless by having serfs available to do everything, up to and including putting their socks on for them in the mornings. In Goncharov's  view, serfdom is a curse on both the serfs and their owners. Goncharov provides the antithesis to Oblomov in the character of Stolz. Stolz is a constant go-getter, always working, learning and traveling; filling his life with knowledge and experience. Rather pointedly, Goncharov makes Stolz half-German, apparently indicating that Russians need to take a more European approach to life. Just to further underline his point, the author makes all his male Russian characters idlers or schemers.

If Oblomov was just a singular, eccentric character the novel would be no more than a farce. Goncharov is also using the character to symbolically describe the inertia and backwardness of Russia itself. Stolz urges Oblomov to take an interest in current events, and, on the odd occasions he does, mention is always made of the French and British inventing, exploring or getting into scrapes with other countries. Russia is notable by its absence. Part of Oblomov's lassitude stems from the fact that he's asked himself the question, what is life for? He senses and even realizes that the only true answer is a life of activity and achievement, but at a certain level he sees all that rushing about as being essentially meaningless. If one's working to earn earthly comforts, why not skip the work and wallow in the comforts? In this sense the novel does tackle one of the big questions: is industriousness meaningful or just a way of marking time?

Goncharov should also get credit for presenting his female characters with far more depth than is usually found in nineteenth-century novels written by men. Olga is shown as a complex being, and the description of her married life with Stolz is startling because the author takes great pains to show that she and her husband are true partners in the relationship. That's pretty enlightened for 1859. This brings up the only flaw in the book: the overly long description of Olga and Stolz's courtship and marriage. This section of the novel is thinly disguised editorializing, and it's a bit of a slog to get through. Putting aside this slice of the novel, Oblomov is funny, maddening, fascinating, challenging, and an overlooked gem of Russian literature.
Posted by Cary Watson at 4:57 PM