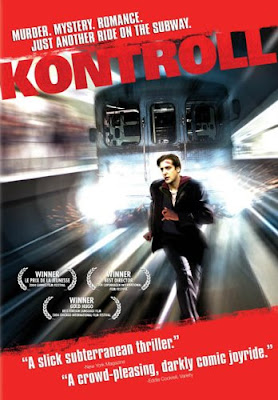 The Hungarian film Kontroll ticks all the cult film boxes: it's got loads of quirky characters; the plot is fanciful and mostly opaque; the humour is deadpan; the setting is unusual; and the ending is ambivalent. The fact that it succeeds has less to do with these qualities than it does with more traditional cinematic values: solid acting and excellent cinematography.

The story, such as it is, concerns a team of ticket inspectors on the Budapest Metro. Their job is to check that everyone on the metro has actually bought a ticket. It's a crappy job. The public hates them and doesn't  disguise their animosity. The team, as is the case in films like this, is a motley crew that includes the obligatory raw rookie, and, for the purposes of eccentric variety, a narcoleptic who passes out whenever he loses his temper. The team leader is Bulcsu, who is actually highly educated but has chosen to settle into this lowly job. We also learn that for the last few days (weeks? months?) he's been living in the metro, sleeping on platforms and never returning to the surface.

Our team is facing three challenges: they dearly want to catch a scofflaw nicknamed Bootsie who takes a keen pleasure in outrunning them; a rival team of ticket inspectors who taunt them; and a demonic figure who's taken to pushing people in front of speeding trains. Bulcsu also finds himself attracted to a woman who travels the metro wearing a bear costume. All these plot lines reach a conclusion of one kind or another, but it's clear that the director is mostly interested in creating an atmosphere and a look rather than constructing airtight plots.

The entire film has the feel of a dream by way of a fairy tale. In fact, it could even be that everything we see is being dreamed by Bulcsu. The fairy tale aspect comes from the "bear" who turns out to be a beautiful princess and leads Bulcsu up and out of the metro at the film's end. I suppose Bulcsu's prolonged tenancy in the metro could also be a political statement about communist-era Hungary, but that's just a wild guess.

The film's assorted quirks, oddities and eccentricities represent the boilerplate standard in cult films. What's different here is that the acting is first rate. Cult films usually suffer from wonky and/or erratic acting (click here for my list of the Top Ten Overrated Cult Films), but Kontroll seems to be populated by the cream of the local acting community. If you're a Hollywood talent agent reading this blog I heartily recommend that you make a scouting trip to Budapest with the Kontroll cast list stored in your iPhone. The cinematography might be even better than the acting. I say this because the Budapest Metro doesn't look like the most photogenic subway system in the world, but the cinematographer, Gyula Pados, manages to make it look mysterious, dramatic, and beautifully stark. That's quite an achievment given that he does it simply through clever lighting and shot framing. Kontroll is too long and too pleased with its own oddness, but it's always entertaining and great to look at.

I just saw the movie and i was never the best person to analise the abstract... but i have an intuition about this movie.. one thing that got me thinking was about Bulcsú beard. I'm intrigued that in 3 days there's no growth to his beard, even though he's living on the subway with nothing else but his clothes. That made me think that it's not our real world, but some kind of hell or purgatory.. i dont know, that's my wild guess.. what do you think?

Hell or purgatory is a plausible theory, but I wouldn't put any stock in his beard length; continuity in films demands that things like hair length remain the same.