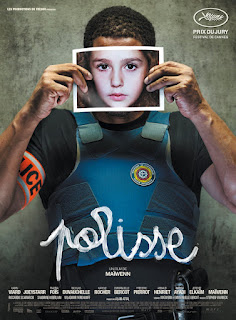 Just about exactly half of Polisse is a very good film. The good half is a documentary-style look at the Child Protection Unit of the Paris police. The film touches upon a half-dozen or more cases involving everything from child abduction to incest. These cases are supposedly based on actual events, and they have a raw intensity that's both painful to watch and fascinating.

The bad half of the film is really, really crap. When we're not being introduced to cases of child endangerment we have to follow the private lives of the nine(?) members of the CPU. Their lives consist of two parts angst to three parts shouting. And screaming. And waving their arms. It's tiresome beyond belief. And all of it's being done to illustrate the moss-covered cliche that cops are affected emotionally by the horrors they have to clean up after. That's probably true but it's been said in a hundred different films and TV shows before this one. The only saving grace is that almost all the actors give great performances.

The blame for all this falls completely on the director. She goes by the single name Maiwenn, and she also co-wrote the screenplay and takes a supporting role as a journalist tagging along with the CPU. This sub-plot has her starting an affair with one of the CPU officers. The affair is pointless and dull and only seems to have been included to give Maiwenn some time in front of the camera, which is doubly unfortunate since Maiwenn is a lousy actor. I can only recommend this film if you keep one finger on the fast forward button on your remote.
Posted by Cary Watson at 11:52 PM