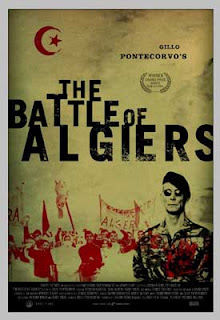 I'm reviewing these two films together because they work brilliantly as a double bill; in fact, The Day of the Jackal is effectively a sequel to The Battle of Algiers. The latter film is justly regarded as a modern classic. It's a superb piece of agitprop that uses a documentary style combined with a cast of thousands that's more appropriate for a David Lean epic. Algiers, which is based on actual characters and events, is about the conflict between the French military and the FLN, the armed group fighting for Algeria's independence from France in the 1950s.

It would have been easy for director Gillo Pontecorvo to create a pure work of propaganda in which the black hat French are seen oppressing the white hat FLN and the Algerian citizenry. On one level that story exists in the film, but what makes Algiers so brilliant is that Pontecorvo is even more interested in showing the mechanics and philosophy behind terrorist and counter-terrorist activities. We see how both sides scheme and strategize, and how success on both sides is mostly dependent on intellectual ability.

The even-handedness in Algiers is also seen in the fact that Pontecorvo does nothing to demonize the French. He shows their arrogance, brutality and casual racism, but he doesn't make it melodramatic. And in one memorable and terrifying sequence we witness the horror of terrorist bombings carried out by the FLN against French civilian targets. It would have been tempting to downplay French suffering, but the film faces it head on. Similarly, we see Algerians ruthlessly tortured and killed by the French, and yet the film stops short of sentimentalizing their suffering.

The best example of the objectivity in Algiers is the character of  Colonel Mathieu, the leader of the French paratroopers who eventually crush (temporarily) the FLN in Algiers. Mathieu is presented as a cerebral professional who goes about his dirty business in the most efficient, effective way possible. He fully realizes his methods are brutal and that he's part of an irreversible historical trend (the end of colonialism), but he does what France expects of him. He's matched on the FLN side by a group of commanders who have to counter French firepower and manpower with cunning and an ability to mobilize the Arab population in mass protests. If there's a problem in this objective approach it's that Mathieu becomes the most compelling character in the film. He's played by Jean Martin with icy cool, and because of his strong performance it creates moments in the film when we're actually hoping for the French to win. Such is the power of charisma. And this is where the link to The Day of the Jackal comes. 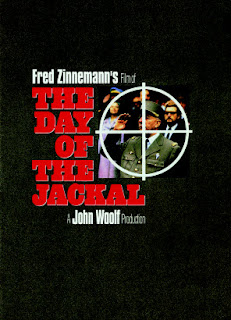 The Day of the Jackal was directed by Fred Zinnemann, an old pro from Hollywood who'd done films like High Noon and Oklahoma! It's pretty obvious that Zinnemann saw Algiers and tried to adapt its style to a more mainstream production. Jackal is set in 1963 and is about a fictional assassination attempt on French president Charles de Gaulle. The organizing group behind the attempt is the OAS, a terrorist organization made up largely of ex-French Army officers looking for revenge for de Gaulle's decision to grant Algeria independence. Like Algiers, Jackal is based on actual historical events, although the character of the assassin is fictional. The conflict in Algeria links both films, but a more obvious connection is the actor Jean Martin. In Jackal he plays Wolenski, an ex-paratrooper acting as the chief bodyguard for the heads of the OAS. The character is what Algiers' Col. Mathieu may well have become in 1963, and it's Zinnemann's clever way of acknowledging the influence of Pontecorvo's film.

Zinnemann's directing style in Jackal is more polished than Pontecorvo's, but he does give the film a documentary feel. We follow the Jackal (the code name for the assassin) as he methodically plans the assassination and goes about acquiring the items he needs to perform the deed. At the same time we see the efforts of the French police, led by the bloodhound-like Commissioner Lebel, as they use the most minor clues to track down the Jackal. Each step in the two separate processes is fascinating to watch, and as the two plot lines converge the tension keeps ratcheting up. Because of this documentary approach, the threat to de Gaulle seems very real even though we know he was never felled by a bullet.

Like Pontecorvo, Zinnemann doesn't try and demonize his villain or lionize his hero. The Jackal (played by Edward Fox) is a professional doing a difficult, dangerous job, and he goes about it with skill, charm and determination. In one key scene the Jackal kills a woman he's been sleeping with. Using only body language, Fox suggests that he regrets having to do this. As in Algiers, the easy choice to make a villain look more villainous is avoided. And thanks to Fox's muscular charm, by the end of the film we're pretty much rooting for him to kill de Gaulle, or at least be foiled in the attempt and make a clean escape. Lebel is not presented as a macho supercop. When we first meet him he's tending his pigeons, which was nerdy even in 1963. Lebel is a civil servant, no more and no less, but he's just as good at his job as the Jackal is.


Jackal is also a great-looking film that skips around various eye-catching European locations, all of them filmed in an understated but glossy style that adds some warmth to what is basically a very cold-blooded story. And keep an eye out for a freeze frame of a woman crossing a street that mirrors a freeze frame used in Algiers. Of the two films The Battle of Algiers is clearly the one that will always have a more prominent place in cinema history thanks to its masterful and innovative blend of agitprop and entertainment. Jackal doesn't offer innovation, but it has to rank as one the most well-made and exciting films of the 1970s,
Posted by Cary Watson at 12:41 AM

I'm willing to bet it is "Day of the Jackal" that will stand the test of time.

Progressing nicely as I am with Alistair Horne's A Savage War of Peace, I am especially attracted to your remarks such as these:

"Pontecorvo is even more interested in showing the mechanics and philosophy behind terrorist and counter-terrorist activities. "

That is very much what Horne did in the chapter I've just finished. I will regard the movie with greater understanding when I get around to seeing it.
=============================
Detectives Beyond Borders
"Because Murder Is More Fun Away From Home"
http://detectivesbeyondborders.blogspot.com

Peter,
Let me know what you think of it.