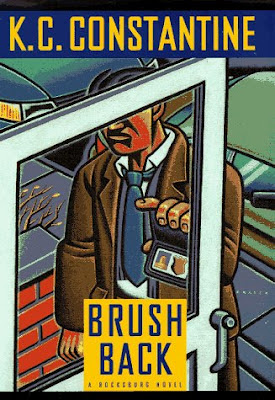 If you've never heard of mystery writer K.C. Constantine you can probably blame the man himself. Constantine began his series of mystery novels set in fictional Rocksburg, PA, in 1972, and until 2011 he avoided publicity and interviews with the single-mindedness of a J.D. Salinger. That's a pity because he's a writer who deserved a much higher profile.

Rocksburg and its environs are to Constantine what Yoknapatawpha County was to William Faulkner. K.C. loves and hates Rocksburg. He has a love and respect for the hard-working Italian and Hungarian immigrants who settled the area and built its steel mills and coal mines, and he has a red hot hatred for the politicians at all levels who have slowly and consciously let the local economy slide into Rust Belt oblivion. Like Faulkner, Constantine is fascinated by his own "little postage stamp of soil" and over the course of 17 novels he introduces us to a very wide variety of its citizens.

Most of the Rocksburg mysteries feature Mario Balzic, the town's police chief. Balzic is not so much a detective as he is the town's confessor-in-chief. Rocksburg's citizens are an exceptionally talkative bunch and Balzic is adept both at listening to them and at drawing out their stories. Balzic doesn't solve crimes through forensic evidence; he talks and listens and talks some more and teases out the motivations that lead to murders. Constantine eschews the evidence side of detection because he's more interested in creating a portrait of the people he grew up with.

Constantine's writing style is best described as regional vernacular. His novels consist almost entirely of dialogue, and they're rich in the slang and accents of western Pennsylvania. And Constantine isn't interested in crisp, tight dialogue. Constantine writes duologues that wander off in all directions, with asides that can last for a sentence, a paragraph or a page. In this way, layer by layer, he builds up his portrait of people whose lives are defined by hard work and blue collar pleasures. The dialogue is always pungent, frequently humorous, and always respectful of the characters. It's normally the case that when an author writes dialogue for a working-class character we're meant to be amused or appalled by the tortured syntax, the dropped g's, and the grotesque malapropisms. Constantine, as Faulkner did, puts poetry and truth into the words of his townspeople.

The sympathy and interest Constantine has for his working-class characters is pretty much unique in American crime fiction. The working-class world in most mysteries is usually just a breeding ground for crimes and criminals. Constantine makes the working class the heart and soul of all his novels. This is another reason that his novels have flown under the radar. The working-class is almost a taboo subject in the U.S.: no one wants to be identified as a member of it or even be reminded that it exists. It takes a certain courage to write a whole cycle of novels that revolve around a social class most readers ignore or feel frightened of. Constantine even likes to discuss the issue of class, particularly the way in which America's ruling elites have ignored and harassed the working class.

Having praised Constantine I now have to knock Brushback. This novel is one of the last in the series and it's pretty weak. There is barely a plot and the dialogue has lost a lot of its punch. What's worse, Constantine's commentaries on class and politics have become straightforward editorializing. Brushback still has strong elements, but it's not the equal of the first eight or nine novels. I can't really recommend Brushback but it's a reminder of how unique and brilliant the balance of this mystery series is.
Posted by Cary Watson at 12:38 AM