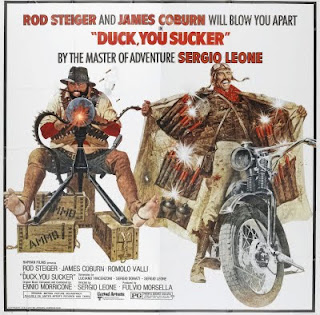 There comes a point when film directors, especially the best ones, begin repeating themselves. And some even end up producing unintentional parodies of their own work. David Lean fell to earth with Ryan's Daughter, an overblown, overproduced flop that brought an epic scale to a pipsqueak of a story. Fellini's final few films, especially And the Ship Sails On and City of Women, felt like clumsy homages to the Fellini style. And Stanley Kubrick's detached, cool style reached a spectacular dead end with Eyes Wide Shut, a film about sex that barely had a pulse. Duck You Sucker is Sergio Leone's swan song as a director of westerns. It's an ugly way to go.

In the Man With No Name films Leone redefined and deconstructed the western. He took a genre that was on its last legs and blended in some elements from folklore, mythology and religion, and then added a wholly original look and sound. But after three films there really wasn't a lot more Leone could do with the western. In Once Upon a Time in the West, his fourth western, Leone tried his hand at a film John Ford might have recognized, and ended up with something that doesn't satisfy fans of either director. Once looks good and sounds good, but the plot is ponderous, slow-moving and confused. It's really a film that's held together by a handful of striking set-pieces and one wickedly entertaining performance by Henry Fonda as the antithesis of every western character he'd ever played.

With Duck You Sucker it's clear Leone is running up the white flag on his enthusiasm for the western. Even the ever-reliable Ennio Morricone stubs his toe with a score that veers wildly between cloyingly sentimental and perversely odd. Duck is unashamedly political in its ambitions. The story is set during the Mexican Revolution and centres on Juan, a roguish brigand who leads a gang consisting of his numerous sons. Juan teams up with an ex-IRA bomber to crack open a bank, but they're sidetracked into fighting for the revolutionary forces. Leone takes the view that the little guy (represented by Juan) always gets screwed in any kind of revolution, no matter who is leading the forces of revolt or what their aims are. This is an unsophisticated and unoriginal idea, and Leone certainly doesn't develop it with any kind of imagination. It's clear this aspect of the film was his reaction to the stormy political climate in Europe, and Italy in particular.

Politics is only one of the problems in Duck You Sucker. Rod Steiger as Juan delivers one of the hammiest performances in his long and jambon-filled career. His performance also moves him into a tie with Al Pacino in Scarface and Speedy Gonzales for worst attempt at a Spanish accent. James Coburn, as John the IRA bomber, does a Lucky Charms Irish accent, which is bad, but not as awful as the flashbacks he finds himself in. These flashbacks give us John's backstory, which is presented without dialogue but with a lot of soft focus and the worst music Morricone ever created. The backstory is a grisly bit of sentimentality: poor John has to shoot his best friend who's a traitor to the cause and is also one-third of a romantic menage a trois he and John are involved in. The third member is a girl, just in case you were wondering.

If the film has a saving grace it's that Leone does manage to work his visual magic in several set-pieces.  Some things get blown up real good, and there some crowd scenes around a railway station that are brilliantly shot and choreographed, but beyond that Duck You Sucker feels like the work of someone who's going through the motions. At this point in time Leone was only competing against himself and it clearly wasn't a fight he had much energy for. Click here for my review of Leone at his peak with The Good, the Bad and the Ugly.
Posted by Cary Watson at 4:18 PM