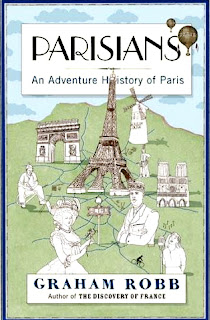 There's no shortage of books about Paris. From tourist guidebooks to histories to memoirs about living in the City of Light there's a book for tout le monde. This also means there isn't a lot to say about Paris that hasn't been said many times before. Graham Robb gives it a good try, but he's not entirely successful. Parisians is basically an anecdotal history of Paris that touches on some of the least known and most mysterious aspects of Paris's history. Robb attempted something similar with The Discovery of France, the story of the country's incredible range of landscapes, and how for much of French history this rich variety was unknown to most of its citizens. It's a brilliant book that's witty, illuminating and constantly surprising.

Robb tells his pocket histories in story form rather than as straight historical essays. I can't say that that choice adds anything to the book except added length, which may have been Robb's intention. Some of the stories offer some remarkable information, such as the assassination attempt made on Francois Mitterand that was, in all probability, a fake organized by Mitterand to give himself a higher political profile. That's a good story. On the other hand, do we need a story about Napoleon's first trip to Paris? There is absolutely nothing new to be told about the man. About half the Paris "stories" are compelling, but the rest just add minor details to some very familiar historical figures and incidents.

Speaking as a francophile, I have a high tolerance for just about anything written about France and the French. I watch the Tour de France just for the scenery and (fingers crossed) the epic crashes. I draw the line at Johnny Hallyday, but beyond that I'm game for anything from Asterix to Zola. That said, Parisians had a hard time holding my attention.