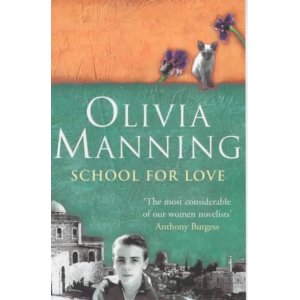 Ever read a perfect novel? One in which the similes and metaphors are all pitch perfect, not a single word or sentence is out of place or redundant, the characters are fully-formed and resonate in the real world, and the novel is neither too long or too short? School for Love is such a novel. This isn't to say that it's one of the world's great books, but if it's not in the Champions League of novels, it's definitely well up in the First Division.

The setting is Jerusalem in 1945, just after the end of the war, and a young orphan named Felix has temporarily come to stay with Miss Bohun, a distant relative, before shipping back to England. Also boarding in the house is Mrs Ellis, a young and pregnant war widow. Bohun is the leader of the Ever-Readies, a small Christian sect with a fundamentalist bent. Felix, like any polite, well-brought-up middle-class boy, assumes Bohun will always act in a well-meaning and honourable fashion. He's sadly disillusioned. In the weeks that Felix and Ellis spend with Bohun while waiting for a ship back to England, she doesn't miss a chance to make their lives just a little bit more miserable, not to mention trying to line her pockets at their expense.

Bohun is one of the great, yet petty, monsters of modern fiction. Manning shows that Bohun's holier-than-thou moralizing is, like patriotism, the last refuge of scoundrels. This is not a wildly eventful or dramatic novel, but it shows how tyrants like Hitler and Stalin can also come in more innocuous packages. Bohun is a narcissist, and her self-love stems from her belief that her adherence to Jesus makes her immune from committing the smaller sins. She's parsimonious, mendacious, vindictive, petty, vengeful, not averse to a minor swindle or two, and has a profound lack of empathy. Bohun sees her faith as a trump card to be played on any occasion when her honesty or ethics are called into question by others or even by herself. She's a personality most of us have met or worked with, and the ranks of evangelical Christians in the U.S. are absolutely stiff with this type of person.

Mrs Ellis is pretty much Bohun's opposite. She's been badly treated by the war but hasn't allowed that to make her bitter or vicious. But she's not a saint. She befriends Felix, who falls slightly in love with her, and eventually loses patience with his dog-like affection and hurts his feelings. At least Ellis is aware that she's hurt Felix. For Felix, his sojourn at Bohun's is a coming-of-age experience that shows him that the adult world is a slippery and untrustworthy place.

School for Love, as mentioned off the top, is brilliantly written. Like other English writers such as Evelyn Waugh and P.G. Wodehouse, Manning has a deceptively simple writing style that flows beautifully and delivers maximum results with a minimum of fuss. This is such a tight, elegantly-constructed novel it's a wonder it hasn't been filmed. I sense that there's an Oscar or a BAFTA waiting for the woman who gets the role of Miss Bohun. Manning's The Balkan Trilogy was filmed for British television, and the novels that make up the trilogy do belong in the Champions League of great novels.
Posted by Cary Watson at 11:38 PM

You nailed it. This is a perceptive and beautifully written essay.