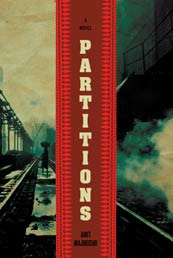 Over the short lifetime of this blog I've frequently touted Rafik Schami (my reviews here, here and here) as a writer whose fiction provides some background to the whys and wherefores of the Arab Spring. Majmudar does something in a similar vein in Partitions, a novel about the cruel, chaotic and bloody division of Imperial India into three separate countries in 1947. Majmudar's novel isn't political in tone or outlook, but the horrors he so artfully describes go a long way to explaining the past and current tensions between India and Pakistan.

Partitions is plotted like a thriller and written like an epic poem. The novel follows four individuals caught up in the two-way exodus that preceded the creation of Pakistan. Muslims are heading west to resettle in land that will become Pakistan, and Hindus and Sikhs are fleeing east to India. All the refugees are preyed upon by murderous sectarian mobs, as are those who choose to stay on the wrong side of the border. Hundreds of thousands of people would eventually be killed in the upheavals surrounding Partition. The four people at the centre of the novel are Masud, a Muslim doctor; Simran, a Sikh teenage girl; and two Hindu boys, Keshav and Shankar.

All four characters face death on more than one occasion, and their progress to safety is fraught with tension and harrowing episodes of violence. It's in this regard that Partitions reads like a thriller: characters are left in cliffhanger situations and frequently leap from the frying pan into the fire. The novel has an epic poem quality thanks to the author's audacious decision to make his narrator a ghost. Yes, a ghost. The spirit is that of Dr. Jaitly, the father of Keshav and Shankar. He died months before Partition and he now watches over events, flitting from place to place like a Greek god in The Iliad to observe events and, on occasion, to make ineffectual attempts to intervene in the life and death struggles he witnesses.

Majmudar's decision to make the narrator a ghost is a bold one. Some readers are going to find that this is a distracting or ridiculous narrative device, but I think his intention is to give the novel a voice of humanity and empathy that's divorced from a sectarian viewpoint. Jaitly the ghost sees horrors in a way that Jaitly the mortal would never be able to. Having a ghost as a narrator also lends itself to Majmudar's finely crafted prose. Majmudar is a poet as well, and it shows in sentences like this one describing Masud standing beside a column of refugees:

The family is staring at him. A gentleman heron perfectly still against a background of shuffling migration.

Jaitly has an impressionistic view of what goes around him, conveying violence and distress and hatred with finely-formed, terse descriptions that seem all the more powerful for being brief. Another writer might have gone for lengthy, gritty descriptions of the various horrors of  Partition, but the economical, poetic approach seems to work better in this case. And on a purely aesthetic level there's no disputing that Majmudar is fine writer.

The only problem I had with Partitions is that the ending brings together the four characters in a symbolically convenient manner that's a bit too cozy and predictable. That aside, Partitions is yet another world-class novel from the Indian sub-continent. In the last few years just about every novel I've read from that region has been better than the last. Here are my reviews of novels by Manu Joseph and Yasmine Gooneratne, and although I haven't reviewed it yet, I have to mention Sujit Saraf's The Peacock Throne, which may have to rate as the Great Indian Novel.