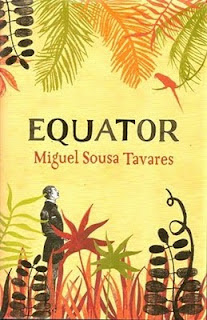 I was about halfway through this novel, and enjoying it quite a bit, when it decided to veer off the road, plough through a fence, rollover five times and burst into flames. I couldn't stop it, there was nothing I could do, really. It started off as fairly unique story about Portugese colonial affairs in the early 1900s, but then...I'd better start at the beginning.

Luis Bernardo is a well-off member of Portugal's ruling classes, spending his time in leisure pursuits and not working too hard at the family shipping business. He's not, however, an empty-handed playboy; he also writes liberal-minded articles on the subject of Portugal's colonies. His well-regarded articles bring him to the attention of King Dom Carlos, who decides to appoint him Governor of Sao Tome, a Portugese-owned island off the coast of Africa. Portugal is coming under pressure from Britain to end its de facto slavery on the cocoa plantations on Sao Tome. Bernardo's job is to try and ascertain if slavery does exist on Sao Tome and, if it does, persuade the plantation owners to loosen the shackles, as it were. Time is of the essence because the British are going to appoint a consul to the island, and he's going to be investigating the situation as well. If the consul decides that slavery exists, the British will ban imports of Sao Tome cocoa, which would be disastrous for the island's economy, not to mention Portugal's image.

The novel starts off well with its portrait of colonial society and plantation life on Sao Tome. We soon realize that Luis' principled stand against slavery is going to make him a lot of enemies on the island, not to mention making his job alsmost impossible. Just when the novel should be getting deeper into the issue of slavery the story suddenly jumps to India where we meet David Jameson, the man who will become the British consul in Sao Tome. It's here that the car wreck begins. Up until this point the writing had been unspectacular but decent. From here on in the novel becomes a telenovela. A bad telenovela. Jameson's backstory is described at ridiculous length and by the time he gets to Sao Tome the novel has become a combination soap opera and bodice ripper. The last half of the novel is dominated by Luis' affair with David's wife, Ann, and there's nothing good to be said about it except that Tavares might be a nominee for the Literary Review's bad sex in literature award.

Equator would be just another bad novel if it didn't wander over the line into racism. The first example of this is that not one of the main or secondary characters is black. How do you write a modern novel about slavery and not include a black character? The only black characters we get are a faithful manservant, a nubile, but silent, maid, and Gabriel, a plantation worker who leads a brief rebellion on the plantation he works at. This is racism by omission. A nastier example of racism comes at the very end when Luis goes to see Ann with the intention of taking her off the island with him. He finds her having a roll in the hay with Gabriel. Luis promptly goes back home and kills himself. The relationship, if there is one, between Ann and Gabriel hasn't been set up, so their bonking session is simply a plot device to cause Luis to kill himself. The way the scene is written one gets the impression that the author is equally horrified that Ann is getting it on with a black man. Not nice.

Equator is further hampered by a few too many passages that read like high school history lessons and a translation that's pretty sloppy. I don't suppose a translator can rewrite whole passages, but you'd think he could iron out some of the lumpy syntax. Peter Bush, the translator, has won various awards for his work but this effort looks to be a blot on his record.