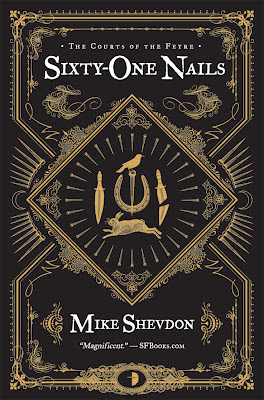 I wouldn't normally review a book I quit halfway through, but in this case the novel's failures point out the strengths of two very similar authors. Sixty-One Nails is in the urban fantasy genre, the urban in this case being London. The protagonist is Niall, a nobody-in-particular until he collapses on a Tube platform with what looks like a heart attack. It turns out he's just survived an attack by the Untainted, the name given to pure blood fairies, or Feyre, as they're called here. It seems that Niall is some kind of half-breed fairy and the Untainted want to kill people of his ilk. Niall is saved by Blackbird, a fairy woman, and she explains that there are seven Feyre courts residing in London, and Niall must seek the protection of one of them.

I threw in the towel on Nails for two reasons: one, the plot kept slipping back and forth from first to neutral. Two, Shevdon is vanilla all the way when it comes to prose and world-building his magical London. The pedestrian prose isn't a major problem (J.K. Rowling has made billions with an ABC writing style), but when it's allied with a second-rate imagination it creates a fatal problem. Shevdon's attempts to describe magic and the magical world are weak and infrequent; they all feel like slightly reworked bits from Harry Potter and Star Wars. He also succumbs to the curse of many fantasy writers: prolixity. Rowling was one of the worst offenders in this regard in the last four Potter books, but she's far from alone. I know from having shelved books at the library for five plus years that sci-fi/fantasy writers are the pulp and paper industry's best friends. In Nails, a lot of the excess paper consumption stems from the characters spending far too much time debating their every move and option. Poor Niall can't open a door without having a long natter about it. And London, as a setting, is not used to full advantage. A few place names are mentioned, but other than that the action might as well be taking place in Chicago.

Shevdon is working the same side of the street as Mike Carey and Ben Aaronovitch. Both of these authors write urban fantasy series set in London. Carey's features a private eye/exorcist named Felix Castor, and Aaaronovitch's hero is Peter Grant, a young copper and apprentice wizard. Both writers keep their stories moving at a brisk pace, and their magical elements are clever and believable, not just add-ons to liven up a standard adventure story. Both of these writers make London come alive in their novels; in fact, in both series London qualifies as an important secondary character, not just a location. Carey & Aaronovitch have their faults (Carey's books could use some pruning), but if you want to attempt an urban fantasy series they're the boys to measure yourself against. Here are my reviews of the latest appearances by Felix Castor and Peter Grant.
Posted by Cary Watson at 7:49 PM