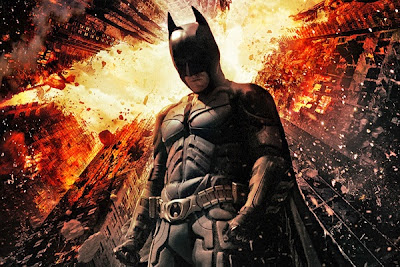 A confession: I haven't liked any of the Batman films. It hasn't mattered if it was Tim Burton, Joel Schumacher or Christopher Nolan doing the directing, I've found all of them fatuous, overblown and dreary. It turns out, however, that TDKR is the least annoying of the bunch. That doesn't mean it's good, just that it doesn't commit any epic blunders. It's worst sin is that it's utterly pedestrian. It's not dull, but it's not exciting; it's not dumb, but it's not clever; and the acting is competent, but not gripping.

The major improvement in Nolan's third crack at Batman is that the speechifying has been cut way back. The previous film, The Dark Knight, was stuffed with tedious, stilted orations about morality, personal responsibility, yadda, yadda, yadda. Each of the major characters got the chance to yak it up, and each time one of them opened their mouth the film ground to a halt. If this film's been greatly improved by a decrease in pretentious chatter, it's a bit surprising to report that the action elements have become weaker. We get some generic fistfights between Bane (the villain du jour) and Batman, Catwoman roughs up some people, and that`s about it. The action set-piece is supposed to be a fight between hundreds of cops and an equal force of Bane`s henchmen, but the sequence is practically over before it begins and it isn`t filmed with any visual imagination. All of the action is accompanied by Hans Zimmer's hyper-bombastic soundtrack, which is scored exclusively for tea kettle drums and tubas, and sounds like a symphonic ode to dinosaur flatulence. On the plus side, the pacing is good and the special effects are seamless.

The mega-success of Nolan`s Batman films has always struck me as a bit surprising. I think the main reason for it is that Nolan`s films appeal to the demographic that takes their comic books very, very seriously. For decades comics were only of interest to kids and teens. In 1977 Heavy Metal magazine appeared in North America and the ground rules in the comic book industry changed. Heavy Metal was a mix of sci-fi and fantasy comics, all of them featuring copious amounts of violence, nudity and  rough sex. Batman`s Marquis of Queensbury rules-violence and chaste lifestyle couldn`t compete with Heavy Metal, at least among teen readers. Heavy Metal (and its imitators) also pulled in adult male readers, and suddenly the superheroes of the Marvel and D.C. universes had to get dark, dirty and serious to keep up with Joneses. It`s from that point onwards that "serious" superhero comics became an obsession amongst precocious 12-year-olds and thirtysomethings suffering from arrested intellectual development. And that's exactly the demographic, I suspect, that appreciates Nolan's approach, which, according to the fans, adds psychological depth to the superhero genre. The comic book people have finally found a director who takes their hero (and their obsessions) as seriously as they do.