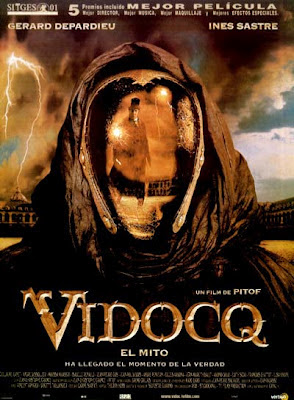 Based on Vidocq, it's easy to see why Hollywood thought Pitof, Vidocq's director, might be a good choice to helm Catwoman in 2004. Well, the world knows how that turned out. But don't let the wet furball on the carpet that was Catwoman stop you from seeing Vidocq. Vidocq was an actual, larger-than-life figure from nineteenth-century French history. He was a master criminial who then became the founder and head of the French police, and after leaving the police he became the world's first private detective. Not one to undersell his abilities, Vidocq called his detective agency the Bureau of Universal Intelligence.

This film is not a biopic, although it's amazing that no one has attempted such a film. This is a Vidocq story as might be imagined by Stan Lee. Things begin with Vidocq (played by Gerard Depardieu) brawling in a glassblowing factory with a mysterious figure wearing a voluminous cape and a mirrored mask. This is the Alchemist, a spectral terror who supposedly haunts Paris' grimmest arrondissements. Vidocq is killed by the Alchemist and the story switches to Etienne Boisset, a young journalist who wants to be Vidocq's biographer and is trying to find out what clues led Vidocq to the Alchemist. I'll draw a veil over the rest of the plot to avoid spoilers.

For a movie that feels and looks very much like a comic book (in the best sense of the term), Vidocq is solidly plotted. This isn't just an exercise in visual tricks and gratuitous action sequences. The basic concept is ridiculous, but its internal logic is flawless. What undoubtedly drew Hollywood's attention to Pitof is is his visual flair, which is on constant display. The film was the  first to be shot with digital equipment, and Pitof  jumps at the chance to use the new technology to create fantastical cityscapes and eye-catching landscapes. And the Alchemist is a damn cool villain, combining kung fu-ish moves with a serously sinister lair and a very nasty taste in young girls. The only flaw in the look of the film is Pitof's fondness for extreme closeups, which look like bad TV thanks to the (then) limitations of digital equipment. Even with that minor problem Vidocq is still outlandish fun. If you haven't had enough of cartoon superheroes and villains this summer, hunt this one down.

The trailer below is in French, but it gives a good idea of the look of the film, including the dodgy closeups.