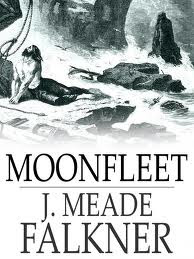 "Ripping yarn" is a mostly English literary term used to describe a story that's packed with action, cliffhangers, adventure and sturdy heroism. Moonfleet represents the gold standard in this genre.  Set in the English coastal village of  Moonfleet in 1757, the plucky lad at the centre of the story (ripping yarns require a minimum of one plucky lad) is John Trenchard, a teenage orphan who falls in with smugglers and the search for a diamond once owned by a notorious smuggler named Blackbeard, whose ghost supposedly haunts the town's churchyard. After John makes a hair-raising visit to a crypt under the church, the action and tension never let up in a story that ends up spanning decades. Cliffhanger follows cliffhanger (literally, in one case), and the novel ends up feeling like a slimmer, more entertaining version of Les Miserables.

The striking thing about Moonfleet is that it works so well as a thriller. Thrillers seem like a relatively modern genre, but Moonfleet certainly manages to tick most of the thriller boxes. Each challenge the hero is faced with is overcome with difficulty, and no sooner has he jumped out of the frying pan then he's into the fire. And the story is filled with a variety of thrills: a clifftop chase, disasters at sea, betrayals, and the 18th century equivalent of a big heist. The trials and tribulations of John and his companion Elzevir seem to be strongly influenced by Jean Valjean's ordeal in Les Miserables, or Edmond Dantes in The Count of Monte Cristo. But this isn't just a pastiche; Moonfleet has a distinct style and a great sense of place.

What's also amazing about the book is that it's only been filmed once, in 1955, and based on the plot description on IMDB the filmmakers made major changes to the story. Moonfleet is ridiculously entertaining, and the only minor mark against it is that sometimes the dialogue is excessively archaic. Falkner wrote two other novels, one of which was The Lost Stradivarius, an odd story about a man seemingly possessed by a violin, although the sub-text seems to be a veiled warning about the evils of homosexuality.
Posted by Cary Watson at 2:08 PM