Paintings In The Flesh

I just got back from a trip to Windsor/Detroit which included a visit to the Detroit Institute of Arts, a mid-sized gem of an art museum located just on the edge of the downtown area. I have no background in art, but I've always been enthralled by paintings, largely because my own talent for drawing or painting begins and ends with stick men. Clumsily-drawn stick men. Growing up I was painfully aware that my classmates, parents and sister could sketch anything, and with more than a fair amount of skill. It was all enormously unfair and that childhood trauma has left me haunting art museums, staring with envy and awe at what people with actual skill can do.

This is a roundabout way of introducing something I noticed while walking through the galleries of the DIA: some paintings have more impact when seen in the flesh, as it were, than they do when reproduced in art books or prints. It's also true that other paintings look no better or worse than their reproductions. Here's what started me thinking about this at the DIA: 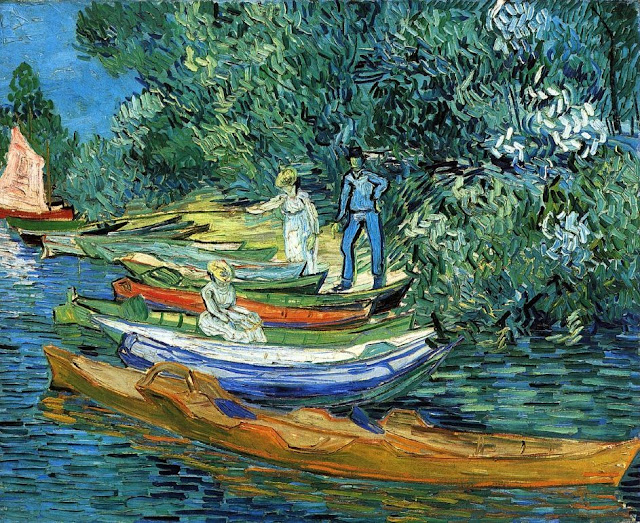 This is Van Gogh's Bank of the Oise at Auvers, and what you're looking at, as beautiful as it is, offers only the vaguest hint of the ferocious visual intensity of this painting. You stand in front it and wonder if it's being lit from within.Van Gogh's Good & Plenty-sized brushstrokes, nestled together with the well-ordered charm of a brand new box of crayons, produce a pixel-like effect of illumination. No reproduction captures this eerie luminosity. Some of the Van Goghs I've seen in the Musee d'Orsay are equally bright, but this one stood out even more because the DIA keeps its galleries dimly-lit except for spotlights shining down on the paintings.

Here's another painting at the DIA called Zodiacal Light by Sylvia Mangold: 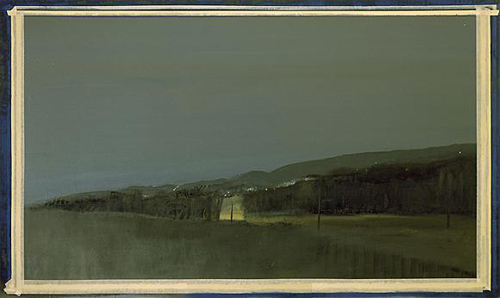 This is an even better example of a painting that suffers by not being viewed in situ. For one thing, nothing can capture its size, which is a healthy 152x254 cms. And this particular photo of the painting suffers from harsh lighting. Zodiacal Light is an attempt to capture a particular kind of night sky, and if the painting isn't seen in exactly the right lighting conditions (low), the magic in this image is lost. The Van Gogh's brightness leaps out you, while Zodiacal's size, super-subtle gradations of grey, inky blacks, and shocking pinpoints of white light draw you into an ordinary landscape made spectral and poetic.

The Hood Museum of Art is part of Dartmouth College in Hanover, N.H., and they have a painting that combines both size and visual intensity called Standard Station by Ed Ruscha: 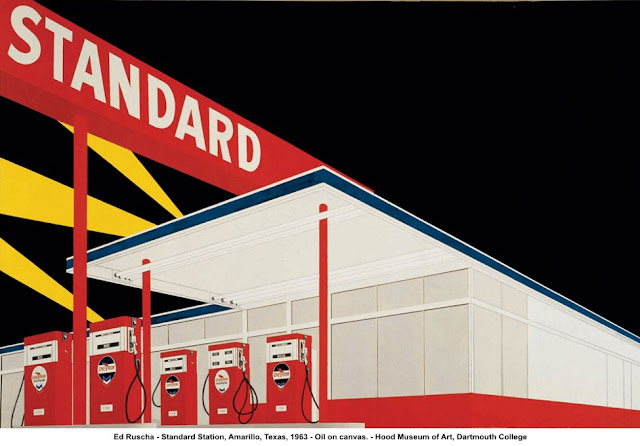 Standard is a whopper of a painting, measuring 64x121 ins. It's size and the jolting contrasts between the red, white, yellow, and black wedges of colour make this an entrancing, intimidating painting to stand in front of. That isn't something you can get across in an art book. The size is the key to the painting's power. This expanse of canvas was traditionally reserved for depicting scenes of martial glory or biblical significance, and Ruscha gives his gas station the same epic treatment to indicate the significance of the car in American culture.

And on the other hand we have Dancers in the Green Room by Edgar Degas, also in the DIA:

Yup, the above image is pretty much exactly as the original looks. It's certainly worthwhile to see it in the flesh, but it doesn't have the same "pop" as the other paintings I've described have. I'm not the first to notice this sort of thing. Hang out near the Mona Lisa in the Louvre and you'll hear lots of people mention how underwhelming it is to see it first hand.

The moral of this story seems to be that none of our hi-res, 1080p, 3D, 48fps technology can replace the emotional, visceral impact created by eyeballing a painting in the flesh. Some paintings don't suffer from being viewed through a filter of photography, but it's more than worth the effort to journey out to nearest gallery or museum to find the the ones that seem to be as alive as the people viewing them.
Posted by Cary Watson at 5:40 PM