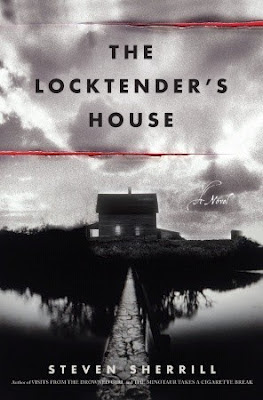 Steven Sherrill is an all-around talented guy; a five tool player, as they say in baseball. He's a novelist, poet, painter, and he plays the banjo. His first novel was The Minotaur Takes a Cigarette Break (my review here), and it was an audacious success, placing the Minotaur from Greek mythology into everyday life in North Carolina. Locktender's is almost as audacious but not as successful. The audacity comes from trying to mix William Faulkner with Stephen King. Sherrill is a fine writer, with a real talent for deftly describing roadside America and the thoughts and feelings of its average citizens. Here's an example from Locktender's:

"Janice sat at the cramped kitchen table and wondered if he had all the pomp and circumstance the military liked to muster up as filler for the void left by doubt and sorrow. Thanks for dying. Here's your twenty-one-gun salute, and a seriously folded flag."

In three short sentences Sherrill neatly sums up the bitterness and meaningless of a life wasted in the war in Iraq. The Faulkner side of things comes through in this passage:


"What happened in the smokehouse was almost more than she could endure. Endure. She had to endure. Despite the unknowing, she felt closer--beaten, tired and hungry and sore to the core of her being--but closer to, within reach of, that nebulous and fleeting sense of understanding something."

It's a bit opaque and elliptical, just like Faulkner, but it sets a mood perfectly. The main character is Janice, whose boyfriend dies in Iraq as the story begins. This event gives Janice a psychic shock that she reacts to by abandoning her life in North Carolina and setting out on the highway with no clear idea of where she's going. Janice, whose nervous breakdown soon begins to border on madness, ends up at a seemingly abandoned house in Pennsylvania located at the end of the portentously named Sabbath Rest Road. The old clapboard house sits by an abandoned canal and has no running water or electricity. Oddly, though, the kitchen is provisioned with preserves of various kinds. Janice's breakdown moves closer to madness as she begins to have dreams about a horrible event in the past which took place when the canal was operational. She then meets Stephen, a sculptor who lives a relatively short distance away. Stephen befriends her, but even his kindness and warmth can't stop Janice's decline. It's at this point that Janice's dreams seem to come to life, and what began as a nervous breakdown may in fact be a haunting. I'll stop here to keep things spoiler-free.

The problem with the novel is that Sherrill doesn't commit fully to the idea of telling a ghost story. He trots out all the tropes of the modern ghost story (is it all in her head or is it real? Is she possessed or haunted?), but he seems to get shy about going the whole Stephen King. I mention King because the supernatural aspect of the plot has certain similarities to King's Bag of Bones, the only King novel I've ever read, as it happens. Locktender's could probably have stood on its own as a psychological study, but once things that go bump in the night are introduced they can't be left underdeveloped; it's a genie that can't be put back in the bottle. When Sherrill does concentrate on making things creepy he's quite effective, but then Stephen gets in the way, and I don't mean King.

The character of Stephen is the shoddy weld that joins the spooky and non-spooky parts of the novel. He's that stock character of romantic fiction: the artist who's hunky, healing, sensitive, cool, just that little bit kooky, and fun to be around. Janice shows up on his doorstep acting strangely and just gets nuttier as the story unfolds. Despite the abundant evidence that this is not a woman to get hooked up with, unless it involves steering her towards the nearest hospital, Stephen continues to help and comfort her, and even romance her. I know people in ghost stories are occasionally supposed to make unwise decisions ("Let's see what's making that screaming sound in the basement."), but Stephen's actions make no sense at all. And their scenes together are further marred by bantering dialogue that sounds like it was generated by a rom-com bot. It could also be argued that Stephen has no real role in the novel except as someone for Janice to bounce her craziness off of.

Early in the novel there's a hint that the madness and violence on display might be a symptom of contemporary (and historical) life in the U.S. This idea isn't developed, which is unfortunate because it might have given the book some resonance. The best modern ghost story I've read is The Little Stranger by Sarah Waters. It's set in a decaying English manor house in 1947, and the upper crust family to whom the house belongs are living in genteel poverty. They're also having poltergeist problems. On one level the story is about whether the male protagonist is the source of the ghostly problems. On a whole other level the novel is about the sweeping cultural and political changes taking place in Britain thanks to the Labour Party. The occupants of the manor are seeing their wealth greatly diminished, their social status eroded, and their land is being sold for council housing. For the aristos, it would seem that Britain's zeitgeist has manifested into a poltergeist. The Locktender's House is missing this extra layer of meaning to make it more than just a well-crafted piece of Southern Gothic spookiness.

It's always a pleasure to read Sherrill's prose, but his ability as a storyteller isn't up to snuff here. It feels like he wasn't entirely sure which direction to take his novel in and he's ended up with something that's slightly pregnant.