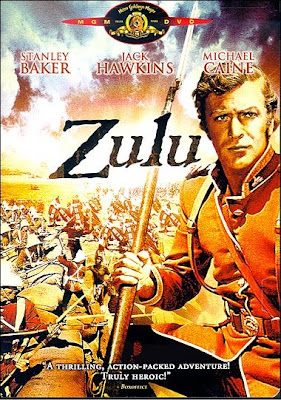 The love that dares not speak its name left the closet quite a few years ago. Most people thought that there was nothing left in the closet. Not so. There is another love that still lurks in there, quietly muttering things like, "Front rank fire! Rear rank fire!" It's the love for Zulu, an action epic about the defence of Rorke's Drift in South Africa by a small group of British soldiers against an overwhelming force of Zulu warriors in 1879. Before I get to the forbidden love aspect of Zulu I'll just say that it's one of the great action movies of all time. It's beautifully paced, the locations are striking, it looks great, the action elements are both plentiful and rousing, and the acting, although occasionally hammy and exceedingly stiff upper lippy, is always entertaining. In it's own way Zulu compares favourably with Lawrence of Arabia, a film that came out only two years previously.

The problem with loving Zulu, or at least admitting to such an amour, is that this film asks us to cheer for a group of whites acting for an imperialist power who use modern weaponry against indigenous blacks armed only with spears. We see the Zulus slaughtered in their hundreds, and as if to underline the technological superiority of the British soldiers, the final shot of the battle is of a twitching heap of Zulu corpses that have just been mowed down by massed, coordinated British fire. What's worse, from a 2012 point of view, is that historically speaking what we're seeing is paving the way for apartheid. And it's not as though apartheid wasn't an issue when Zulu was filmed. Only four years previously South African police had opened fire on a crowd of black demonstrators and killed 69 of them. The Sharpeville Massacre, as it was called, was an international scandal that led to both South Africa's diplomatic isolation and the beginning of more militant anti-apartheid activities within the country and without. Zulu tries to be honourable by having various English characters compliment the Zulu warriors on their bravery, but that's just a moral fig leaf, and it's telling that no Zulu has a speaking part (in English). So from a politically correct point of view there is nothing to recommend about Zulu. And yet...

If you can wear a pair of political and social blinkers while watching Zulu there is no escaping its allure. It's macho filmmaking at its most hairy-chested, and it's celebration of military camaraderie and bravery is hard to resist. One reason it works so well in this regard is that the soldiers are not setting out to be heroes. They're at Rorke's Drift to build a bridge, and are hardly considered front-line soldiers. These guys aren't looking for a fight. We end up rooting for them because, like many other average guy battling the odds films, they find themselves in a situation they aren't equipped for and appear to have no chance of escaping from in one piece. It's a classic David vs. Goliath story. This also makes it typical of a lot of the "Rule Britannia" films that came out in the 1950s and '60s. A partial list would include Lawrence of Arabia, Khartoum, The Cockleshell Heroes, Ill Met By Moonlight, The Bridge on the River Kwai, Battle of Britain, and The Dam Busters. These films emphasize defensive actions or commando operations by plucky, gifted amateurs who are facing long odds. They also build up the image of Brits at war as being unflappable, cool under fire, dogged, and unfailingly civilized. This contrast between the ferocity of war and participants who seem in most respects so unwar-like, gives these films a strong dramatic, and sometimes comedic, edge.The last of the Rule Britannia films was probably A Bridge Too Far, the story of an epic, but plucky, failure.

Are there any other films lurking out of sight in the closet of disreputable loves? Indeed there are. The most famous example is Leni Riefenstahl's Triumph of the Will. This documentary about the 1934 Nazi Party rally in Nuremburg is an innovative masterpiece in documentary filmmaking, but watching it is still a difficult experience when you see so much artistic and technical skill being used in the service of the definitive monster of the 20th century.

And speaking about being on the wrong side of World War Two, this brings me to a director whose career should stay cowering in the closet: Sam Peckinpah. Peckinpah's films regularly turn up on lists of the best westerns/action movies and even films in general. In Cross of Iron (1977) Peckinpah tells the story of a German unit fighting on the Russian front. The film has an uninspired and perfunctory anti-Nazi, anti-war stance that acts as a mask for its real purpose of showing Germans mowing down Russian soldiers. Excuse me? The Russians who were the single biggest reason for Hitler's defeat? Yup, those Russians. It's not even a good action movie, and yet it has never been castigated for being propaganda on the level of Triumph of the Will.

The esteem Peckinpah is held in is further proof, as if any was needed, that the world of film criticism and commentary is dominated by men.Why? Because Peckinpah was the most consistently and enthusiastically misogynist mainstream director there has ever been. The degradation and abuse of women is a theme that runs through many of his films. Straw Dogs and Bring Me the Head of Alfredo Garcia feature explicit and salacious rape scenes; The Getaway has a sub-plot revolving around a female character (Sally Struthers) who is abused by a kidnapper and reacts by becoming his mistress; and even The Wild Bunch, probably his most critically admired film, is littered with examples of sexism and misogyny. The fact that Peckinpah has so much street cred as a director speaks to the high tolerance the film world has for the exploitation of women.

In comparison to Peckinpah and Triumph of the Will, Zulu begins to look pretty good. It's had some high-profile fans over the years: evidently it's one of Ridley Scott's favourite films and Peter Jackson used its battle scenes as a template for the Helm's Deep battle in LOTR: The Two Towers. It's well worth seeing, even if it does reside in that twilight zone of films that could be regarded as very guilty pleasures.
Posted by Cary Watson at 8:19 PM

I'm watching the scene that featured the Zulu's first attack upon Rorke's Drift. Boring as hell and badly staged. I'm sorry, but the best part of the film seemed to be before the battle began.