Book Review: The House on the Borderland (1908) by William Hope Hodgson 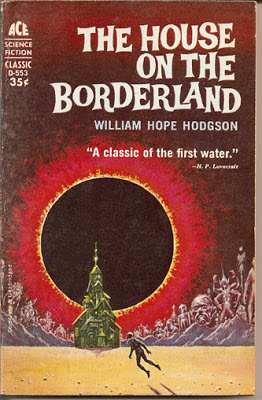 For the most rabid fans of supernatural/horror fiction, utter and complete weirdness counts for a lot; it's a spice that lifts otherwise straightforward genre material into an exalted realm of deliriously entertaining oddness. H.P Lovecraft is the poster boy in the field of determined weirdness. His work isn't brilliantly written or exceptionally scary, but his single-minded focus on describing horrors that are so hideous, so cosmic, that they can't, well, be described adequately except by screaming hysterically, has given him an enduring cult status amongst horror mavens. On a more exalted literary level there's Mervyn Peake, whose sublimely unusual novels Titus Groan and Gormenghast defy categorization, although they're often shelved in the fantasy section of libraries and bookstores.

The House on the Borderland is a book Lovecraft praised often, and it's easy to see the influence it had on him. The story starts off in traditional late-Victorian style with the discovery, in deepest, darkest, rural Ireland, of a manuscript written by an unnamed man who wished to record the events he experienced in his stately home. The site where the home once stood is now an overgrown ruin next to a massive pit into which a river flows and then disappears underground. The story revealed in the manuscript is of a house under siege by demonic creatures that are half-swine, half-human. But that's not all, not by a long shot. The house also appears to be a portal or stargate to another house on another planet (?) in another dimension (?), perhaps even in a separate universe. The alternate house is a duplicate of the Irish one, except for the notable addition of a surrounding mountain range of Himalayan proportions peopled by hideous gods, all of them staring down at the house. And now for the strangest part of the story. In the last third of the novel our hero witnesses the speeding up of time and the aging and destruction of our solar system and the universe. Yes, things get that crazy.

Published in 1908, Borderland is very much supernatural fiction for the 20th century. Up until then the genre had revolved around ghosts, more ghosts, vampires, werewolves, and the occasional ghoul or church grim. In short, supernatural fiction was largely based on familiar creatures and characters from folktales that had been around since forever. Hodgson imagined a new world of terrors. His swine creatures aren't just terrestrial monsters, but, it would appear, emissaries of something vastly more powerful and evil. The final third of the story, with its unprecedented journey to the end of Time, is a triumph of imagination. The only way to adequately describe it is to try and imagine what a Stephen Hawking fever dream might be like. It's more than worth the price of admission, and it's hard to imagine how a sequence such as this could be described better. Borderland might also represent the first time a supernatural story has used the Is This Real Or Is It The Ravings Of A Madman? gambit. If you pay close attention to the actions of the narrator's sister (the only other occupant of the house) you begin to realize that the entire story could be taking place in the narrator's mind.

The House on the Borderland is very entertaining, always surprising, and has more than a few shivery moments. I first read it as a teenager, and the intervening years have been very kind to it. The only knock against it might be that the final section of the story almost feels like an add-on rather than a part of the whole. Hodgson wrote a few other novels and some excellent short stories, all of which are worth reading. The only exception is The Night Land, an even stranger (if that's possible) novel that's fatally flawed by being written in an intentionally archaic style. There's something ironic in the fact that Hodgson wrote his tales of cosmic terror only a few years before the real life horrors of World War I. Hodgson joined the British Army and was blown apart by an artillery shell in April 1918 at Ypres. One can only wonder at what he might have written had he survived the war; even his singular imagination might not have been prepared for what he saw on the Western Front.